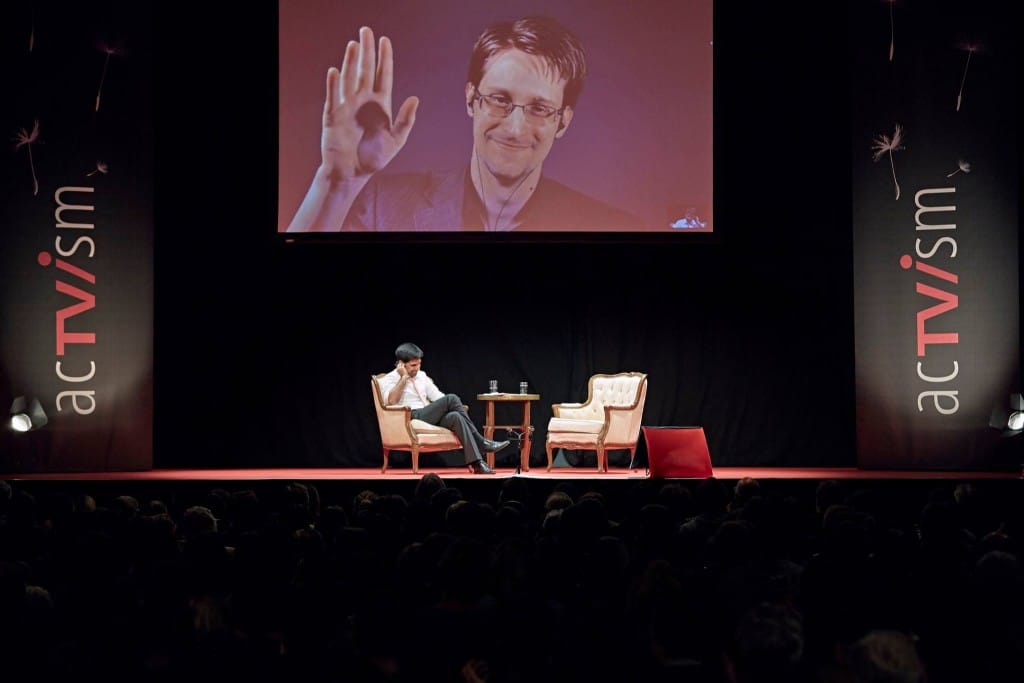 On January 15th, acTVism Munich organized its largest event yet that took place under the title “Freedom & Democracy – Global Issues in Context” at Muffathalle in Munich and featured a live interview with Edward Snowden via video conference from Russia as well as discussions with a panel of leading experts in the field. acTVism Munich’s founder and senior editor Zain Raza moderated the evening, leading the audience through a series of individual interviews with Srećko Horvat, Paul Jay, Richard D. Wolff, Jeremy Scahill and Jürgen Todenhöfer.

VIDEO: Edward Snowden Exclusive | The Deep State & How You Can Make a Difference

The evening commenced with an introductory speech by one of acTVism’s editors and board members,  Rees Jeannotte, followed by an interview with philosopher, activist and author, Srecko Horvat, who spoke about the relevance of social movements in the present and the role of the left while emphasizing the failure in addressing the working class and the need for idealism and hard work in equal measure. He continued to speak about the “Democracy in Europe Movement 2025” which he initiated in collaboration with Greece´s former finance minister, Yanis Varoufakis, in an effort to take Europe in a different direction based on “radical progressive internationalism”.

The senior editor of The Real News Network, Paul Jay, subsequently addressed the problems of corporate media control and the responsibility of the independent media to “go where the people are” in order to effect change. He elaborated on concrete cases in which the news is distorted and put special emphasis on the denial of global climate change, by referring to the present time as “the most decisive age in human existence”.

Richard D. Wolff, professor of economics, author, and according to the New York Times “America’s most prominent Marxist economist”, talked about the significance and influence of Karl Marx while criticizing the general lack of the critical perspective in economic education. He proceeded to describe the flaws of the capitalist system and provided an alternative known as “work cooperatives” – a way of organizing production in which democracy plays a central role at the workplace.

Jeremy Scahill, founding editor at The Intercept, was welcomed next to talk about the history and scope of the military-industrial complex. He commented on the “revolving door” behavior that exists between US government and the private sector as only “one aspect of the bipartisan nature of legalized corruption”. Further topics that were discussed encompassed Trump’s foreign policy, the Drone papers and the role of the German government in the War on Terror. Scahill criticized the German government  for its submissiveness towards U.S. influence in foreign policy matters. In describing the value and effectiveness of activist movements he stressed the need for “going into the streets” in order to bring about change.

Jürgen Todenhöfer, a German publisher, lawyer, former media manager and politician, discussed the problems in the Middle East in context with U.S. politics while claiming that Western countries pursued the policy of “destabilization”. He continued by supporting the diplomatic role of Germany in the Middle East that favored peace solutions. He underlined the fact that wars are never necessary and that politicians pay attention to public opinion and therefore encouraged the audience to speak up and take part in the political process, especially through social media.

The final interview of the evening with Edward Snowden covered the history of intelligence agencies, the influence of whistleblowers before him, the threat of having faith in elected leaders to resolve problems and the significance and responsibility of the people. In the spirit of civil disobedience, he remarked that at times the only moral choice was to break the law and that the expansion of human rights always started as a riot against orthodoxy. He proceeded to talk about the meaning of liberty as the fundamental right to act without permission. Concerning his personal situation in exile, he described the existing technological means as a source of hope that allowed him to communicate with people around the world.

The event ended with a short crowdfunding video produced by acTVism Munich.

Hi, do you have this Snowden interview – https://www.actvism.org/events/actvism-reportage-edward-snowden-event-videos-bilder/, without the German dubbing?