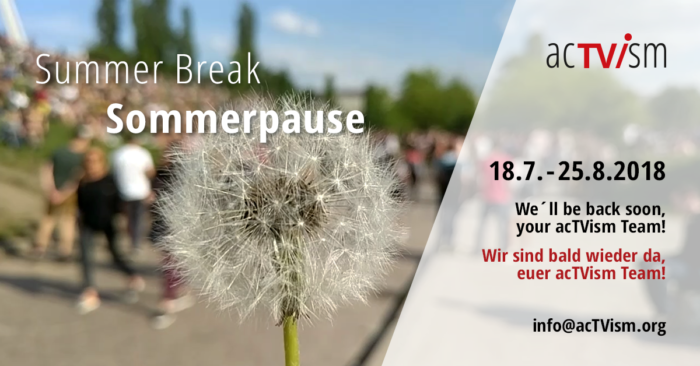 We are taking a Summer Break – You will find Information regarding our Future here!

We’ ve come a long way together, thanks to your donations and the commitment of dedicated volunteers. We’ve built a truly independent non-profit & bilingual media network, which does not rely on advertisements and state or corporate funding.

However, our limited capacities and resources also mean that we encounter financial difficulties and staff shortages. The summers are one of those periods where we neither have sufficient personnel nor financial resources to continue. Hence we will be taking a break from July 18th until August 25th to recuperate our energy and financial resources, which we will require for the next season starting in September.

Thanks to your support, acTVism was able to organize a major event called “Freedom & Democracy: Global Issues in Context” this year with the 2012 & 2016 Presidential Candidate for the Green Party USA Jill Stein, Pulitzer Prize winner investigative journalist & the publisher of the Snowden NSA-Leaks Glenn Greenwald and artist, activist and journalist Abby Martin. The event was attended by hundreds of people and viewed over 130,000 times online.  We started the event series “Freedom & Democracy: Global Issues in Context” with NSA-Whistleblower Edward Snowden, investigative journalist Jeremy Scahill and other experts on the panel in January of 2017 which was attended by 700 guests and viewed online by about two million people.

VIDEO: A Message for our Viewers & Supporters

Together, we have built a rich archive of vital information that we believe is going to strongly benefit ourselves and future generations. We intend to continue on that path and we’ve already planned our next projects for September.

The only thing that hasn’t changed since day one is the fact that we’re entirely dependent on your support. We have started a crowdfunding campaign aiming to reach 1,000 donors who can support us with as little as 5€ a month through our Patreon page or Crowdfunding platform at betterplace.org. Click here to find out how you can support our vision on a regular basis via different payment methods.

Thank you for the love and support!