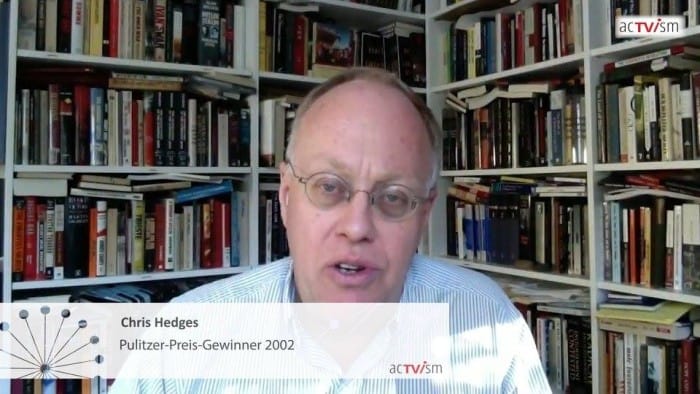 In the following Videos acTVism Munich interviews Chris Hedges to discuss a wide range of topics, including the interests that really dictate U.S policy both domestically and abroad, government surveillance globally and the role of activism.

To see our previous work with other journalists & activists, visit our YouTube Channel: www.youtube.com/acTVismMunich

Christopher Lynn “Chris” Hedges (Septermber 18, 1956) is an american Journalist, Activist and Author. Hedges is known as the author for the Bestsellers “War Is a Force That Gives Us Meaning” (2002) – a finalist for The National Book Critics Award for Nonfiction – “Empire of Illusion: The End of Literacy and the Triumph of Spectacle” (2009), “Death of the Liberal Class” (2010), the New York Time’s Bestseller “Days of Destruction, Days of Revolt” (2012) and his newest work, “Wages of Rebellion: The Moral Imperative of Revolt” (2015).

Chris Hedges worked nearly two decades as a foreign correspondent in Central America, the Middle East, Africa and the Balkans. Hedges has reported from more than 50 Countries and has worked for “The Christian Science Monitor,” “National Public Radio,” “The Dallas Morning News,” and for the “New York Times,” where he worked for 15 years as a correspondent.

He was also part of the team of Reporters from the New York Times that won the Pulitzer Prize for their work on global terrorism. He has also received the Amnesty International Global Award for Human Rights Journalism in 2002.

Chris Hedges writes for several Publications like “Truthdig“, where he writes a weekly column, and for “The Real News Network.”

Please donate to acTVism Munich so that we can continue to produce independent news & analysis – click here!