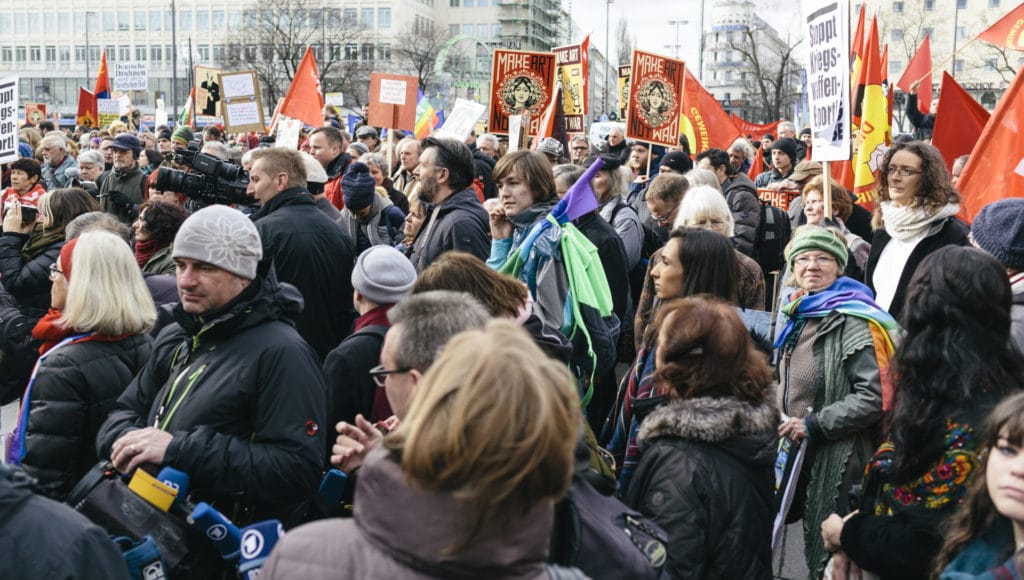 15. February 2016
On the 13th of February, 2016, grassroots movements and activists organized protests ( #AntiSIKO) against the 52nd Security Conference in Munich under the slogan:

“Against militarization and war – Abolish NATO.
No Justice – No Peace – without justice there is no peace.
Right to stay for refugees – no human is illegal.“

On the following day (14th of February) a strategic meeting was held in “Eine Welt Haus” in Munich by the German peace movement. The proliferation of war due to Western imperialism, Germany’s increased global participation in war zones and the rise of poverty, refugees (circa 60 million worldwide) and victims of war are challenging the peace movement more and more. A participant at the demonstration, summarized it with the following statement: “It is becoming more and more evident: the insanity is systemic and has to be addressed accordingly.”

In the following Interview with acTVism Munich, Noam Chomsky describes why and how the Corporate Media discredits grassroots movements:

The protests organized on the 13th of February 2016 started with the encirclement of NATO’s war strategists around the traditional Bayerischer Hof Hotel at Promenadeplatz. Following the opening event at Karsplatz/Stachus at 13 PM, the demonstration route followed along the northern city center ring: Over the Lenbachplatz, memorial place for victims of the Nazi regime, Odeonsplatz through the Residenz Street into Marienplatz (City Center). At the same time a protest chain was formed in pedestrian zone extending from Karsplatz/Stachus through the shopping mile to Marienplatz. 3 info-stations were placed in this area to hold speeches, promote dialouge and exchange, recruit activists and provide a muscial & cultural program. See the activity plan here: https://sicherheitskonferenz.de/de/Protestkette-Siko-2016. The closing event, where the demonstration and protest chain converged again, took place at Marienplatz.
SLIDESHOW GALLERY:

Background: The Munich Security Conference (#MSC), founded in 1963 by Ewald-Heinrich von Kleist-Schmenzin and formely known as “Wehrkundetagung”, has transformed itself into a global marketing and networking event for the military industrial complex. Hence, it is of no concidence that Germany finds itself on the top of the list when it comes arms & military exports.  Since the MSC started extending invitations to NGOs, considered as a whitewashing attempt by #AntiSIKO activists,  the event’s underlying character remains intact: The #MSC is a strategic meeting that claims to be concerned with “Global Security” which activists deem as a “newspeak” term for unaccounatable arbitrary state violence and terror. For many years grassroots movements and activists have therefore organized protests and direct action against the MSC.