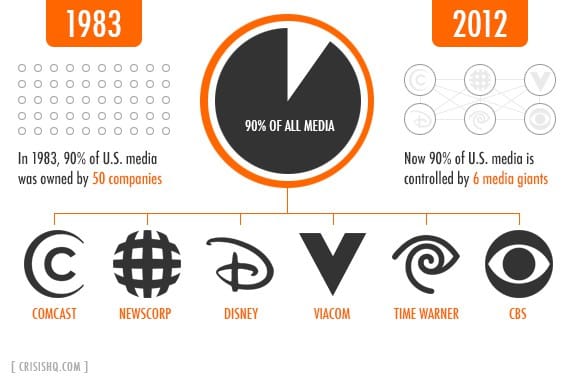 State or corporate media outlets are driven by the motive to maximize profits, or in some countries like Germany, state media forces citizens to pay a monthly fees  that some experts and activists consider is unconsitutional on the grounds that citizens should have uninhibited and free access to a wide range of information that they consider is a prerequiste to making informed decisions towards the political process.  State and corporate outlets also depend heavily on corporate sponsors and/or advertisements agencies and have the inherent tendency to become highly concentrated, both in times of economic growth or contraction. Given this institutional framework and economic environment, state and corporate media outlets are prone to omit or distort information in favour of monopolized interests instead of serving the public interest.

In the video below, Paul Jay and Annie Machon provide advise on how to use corporate and indepedent media outlets to build opinions on various issues:

Did you know that propaganda, media manipulation and public relations were issues that were hotly debated and discussed in academia after World War I?

Edward Louis James Bernays  was an Austrian-American pioneer in the field of public relations and propaganda, referred to in his obituary as “the father of public relations”. He combined the ideas of Gustave Le Bon and Wilfred Trotter on crowd psychology with the psychoanalytical ideas of his uncle, Sigmund Freud. In his ground breaking book called Propaganda which he published in 1928, he writes:

“The conscious and intelligent manipulation of the organized habits and opinions of the masses is an important element in democratic society. Those who manipulate this unseen mechanism of society constitute an invisible government which is the true ruling power of our country. We are governed, our minds are molded, our tastes formed, our ideas suggested, largely by men we have never heard of. This is a logical result of the way in which our democratic society is organized. Vast numbers of human beings must cooperate in this manner if they are to live together as a smoothly functioning society.”