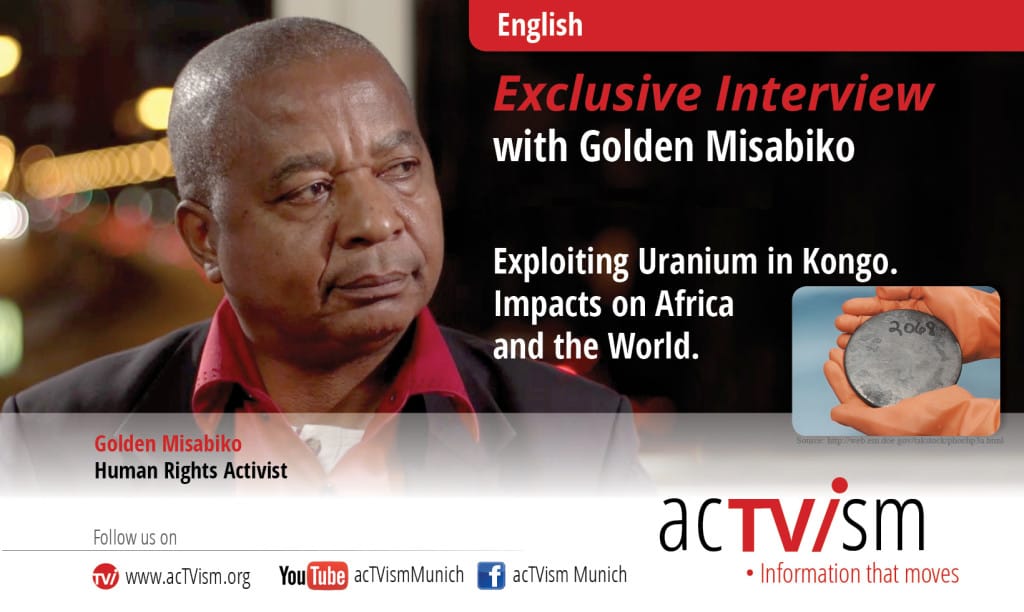 Golden Misabiko on the exploitation of uranium in Congo

Earlier this year, acTVism Munich interviewed human rights activist Golden Misabiko who exposed a secret agreement between the Congolese government an French nuclear giant Areva in 2009. The agreement gave Areva permission to exploit Uranium in all of Congo’s territory. Misabiko was detained by and only released due to international pressure. He is living in exile since 2009.

Due to limited financial resources, personnel and technical capacities, it took us months to publish the Video in German and English.

Please click here to donate, to assist us in the production and publishing process.

Executive Summary taken from the official report of the Ecumenical Network Central Africa in Berlin:

25 years after the catastrophe of Tshernobyl and only months after the nuclear meltdown of Fukushima, nuclear energy is a growing market. Even as protests against nuclear energy rise worldwide, several hundred nuclear power plants are planned to be built in the next decade. Today the risks of nuclear power technology are discussed intensively. But so far medical scientists and environmental activists focus their attention mostly on the dangers of running nuclear power stations and the final storage of atomic wastes. Hardly any attention is paid to the circumstances under which uranium, the raw material for atomic energy, is produced. The global argumentation neglects the working conditions in uranium mines, the health risks, the environmental damages, the circle of recipients to which the radiating material is sold, and the flow of profits in this business.

The Democratic Republic of the Congo (DRC) provides rich sources of uranium in its southern province of Katanga. Since the 1920ies uranium has been mined and exported, in the beginning under the rule of Belgian colonial administration. Despite the known impact of extraction on the health of workers, local communities and the environment, the Congolese government has tolerated the illegal exploitation and exports since the 1960s and seems to be involved in the profits of this business. In 2010 the government of the DRC has signed a contract for the legal and industrial exploitation of the Katanga uranium resources with the French energy company Areva. The details of this contract remain secret, but reportedly Areva has bought the right to the unlimited export of the Congolese uranium reserves. This deal has caused concern, as in the past Areva has been heavily criticised for its practices in the uranium mining business in other developing states, especially in Niger. There, as several scientific studies claim, Areva has neglected even basic safety, health and environmental protection standards, allowing huge areas and parts of the population to be contaminated during the process and as a consequence of uranium exploitation.

Moreover instable political conditions in the DRC persist, including the high prevalence of corruption in business and administrative structures, the lack of an appropriate functioning justice sector and the slight presence of controlling bodies like human rights or environmental activists, scientific research centres or independent and well equipped media. Due to those facts, there is a high risk that uranium exploitation in the DRC might result in severe damages to the environment in Katanga and to the health of the local population, and might as well lead to further corruption and the misuse of public revenues.

You can find the uncut version here: Interview – Golden Misabiko on the exploitation of uranium in Congo

Golden Misabiko is a human rights activist, born and raised in Congo. He’s the president of the human rights initiative Association Africaine de Defense des Droits de l’Homme. Golden Misabiko exposed the dark secrets of his own government a couple of times and went to prison for it. In 2000 he revealed that his government under Laurent-Désiré Kabila executed eight rebels without trial. As a consequence Misabiko was detained and tortured for almost a year. Golden Misabiko did not cave in: in 2009 he published a report detailing the Congolese governments involvement in the illegal mining of uranium. He also revealed that the government had come to a secret agreement with the French nuclear energy corporation Areva, allowing it to search and mine uranium in Congo. Again he was detained, sent to prison and tortured. Thanks to Amnesty International and international support Misabiko was freed in August of 2009 and left South Africa. For his remarkable actions Golden Misabiko was presented with the Nuclear Free Future Award in late last year. He’s still living in exile, his wife and children weren’t allowed to leave the country with their father and husband respectively.

And we wonder why there is so much strife in the world. The Governments of the world are busy making secret deals and Global Nationals are so full of greed and care little what damage they do and life means nothing to them. They treat life like a night at the casino. Winners and losers.