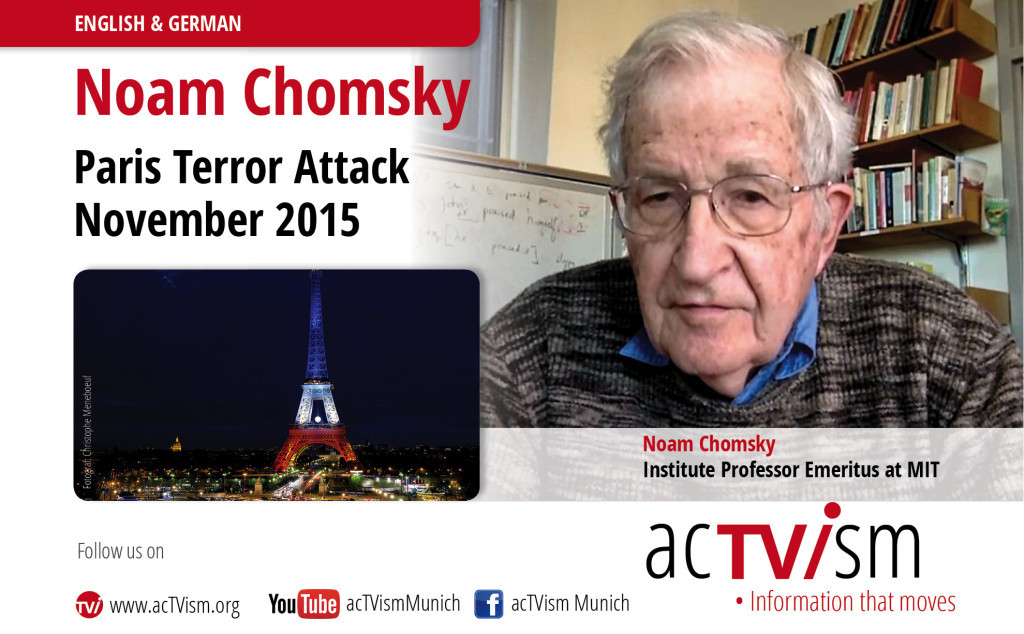 VIDEO: Noam Chomsky on the Terror attacks in Paris – November 2015

On the 17th of November, 2015,  Prof.Noam Chomsky took part in an event titled “Germany’s role in the European Union and International Affairs: Post War History, Present and Possible futures” hosted by acTVism Munich.

Due to limited financial resources, personnel and technical capacities, we plan to release the entire event in a “mini-video” format. This format provides us with sufficient time to translate the content into multiple language and also subtitle & voice-synchronize it for people with hearing & visual impairment.

In this video Prof. Noam Chomsky comments on the recent terror attacks in Paris committed by the self-proclaimed Islamic State of Iraq and the Levant (ISIL/ISIS/DAESH) .

Summary of the Terror attacks in Paris:

On the 13th of November 2015, a number of terrorist attacks took place in Paris which claimed the lives of 130 people and injured circa 368. Targets included the Stade de France in San Denis, which was struck by three suicide bombers, the Bataclan theathre, where an hostage situation ensued, and around cafes and restaurants in Paris. The self proclaimed “Islamic State of Iraq and the Levant” (ISIL/ISIS/DAESH) took responsibility for the attacks stating that it was in retaliation against French air strikes targeted on ISIL in Syria & Iraq. On the 15th of November, 2015, France responded by launching its largest airstrike that involved 12 planes that dropped 20 bombs. This airstrike was conducted under Opération Chammal, which was initially launched on the 19th of September 2014.

These attacks are considered one of the “deadliest” on French soil since the “Paris Massacre on October 17, 1961”, which was committed by the French National Police and that claimed the lives of circa 200 people.

VIDEO: Noam Chomsky on the Terror attacks in Paris

For the full transcript-text, please click here: Noam Chomsky on the Terror attacks in Paris

acTVism Munich e.V. is an independent, non-profit media organization. In order to remain free of state and corporate influence, we rely only on donations from the public. Please donate if you believe that non-profit, independent media for the people is of utmost importance. Thank you! Please click here to donate!

9 replies on “VIDEO: Noam Chomsky on the Terror attacks in Paris – November 2015”

[…] Sourced through Scoop.it from: dev.actvism.org […]

That was the most useless amount of disinformation..I want to see an analyses of events!!???

How is what he says disinformation?

[…] Munich, Germany — In November, AcTVism Munich had the amazing opportunity to interview Professor Noam Chomsky to get his reaction following the terror attacks in […]

[…] Germany — In November, AcTVism Munich had the amazing opportunity to interview Professor Noam Chomsky to get his reaction following the terror attacks in […]

[…] November, AcTVism Munich had the amazing opportunity to interview Professor Noam Chomsky to get his reaction following the terror attacks in […]