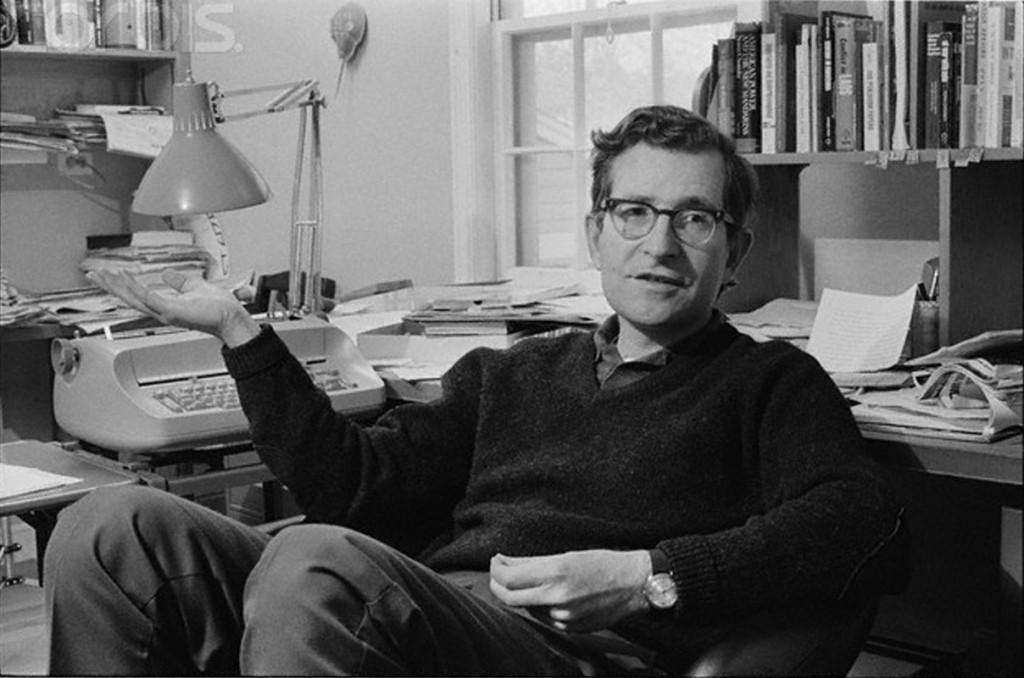 The following video is a historical lecture held by Prof. Noam Chomsky at the Unversity of Wisconsin on the evening of March 15, 1989. In this talk, Prof. Chomsky introduces the propaganda model and explains how propaganda and systemic biases function in mass media by providing numerous examples from their coverage on foreign affairs. We translated the first part of this speech into German – please donate today so we can translate all historical speeches of Prof. Noam Chomsky and archive them digitally into multiple languages by clicking here.

Notable excerpts from the speech:

Noam Chomsky on the views that influential figures held in 20th century about the general population and the need for propaganda:

Now in the last- in the modern period you get a much more sophisticated development of these ideas. So, for example, Reinhold Niebuhr, who is a much-respected moralist and commentator on world affairs, he wrote that rationality belongs to the cool observers, but because of the stupidity of the average man, he follows not reason but faith. And this naive faith requires that necessary illusions be developed. Emotionally potent oversimplifications have to be provided by the myth-makers to keep the ordinary person on course, because of the stupidity of the average man. That’s the same view, basically.

Walter Lippman, who was the dean of American journalists, is the man who invented the phrase manufacture of consent. He described the manufacture of consent as a self-conscious art and a regular organ of popular government. This, he said, is quite important, this is a revolution in the practice of democracy, and he thought it was a worthwhile revolution. The reason is, again, the stupidity of the average man. The common interests, he said, very largely elude public opinion entirely, and they can be managed only by a specialized class whose personal interests reach beyond the locality. That’s Niebuhr’s cool observers. You can guess who’s part of them. The person who pronounces these views is always part of that group. It’s the others who aren’t. This is in Walter Lippman’s book Public Opinion, which appeared shortly after World War I.

Noam Chomsky on the history of propaganda, Creel commission and Edward Bernays:

The Wilson administration established the country’s, I think, first official propaganda agency — it’s called the Creel Commission — which was dedicated to convincing this reluctant or indifferent majority that they’d better be properly enthusiastic about the war that they were opposed to.

A lot of people learned lessons from the capacity to control the public mind, as they put it — slogan of the public relations industry. One of the people who came out of the Creel Commission was a man named Edward Bernays, who became the patron saint of the public relations industry. That’s a big, substantial industry which is actually an American creation, though it’s since spread throughout other parts of the world. It’s dedicated to controlling the public mind, again quoting it’s publications, to educate the American people about the economic facts of life to ensure a favorable climate for business, and, of course, a proper understanding of the common interests.

He himself showed how this was done. Often. By, for example, demonizing the government of Guatemala, the capitalist democratic government that we were planning to overthrow with a successful CIA coup. He was then working for the United Fruit Company, which was opposed to the government because it was planning to take over unused lands of the United Fruit Company, and hand them over to landless peasants, paying the rates that the United Fruit Company had given as their value for tax purposes, which, of course, they regarded as very unfair, because they had, naturally, been lying and cheating about the value. So that was his achievement. And in fact the public relations industry in general has been dedicated to this project ever since.

Noam Chomsky explains the spectrum of debate and its limitations:

So, in the case of the, say, the Vietnam war, which was a major topic of debate, if you look over the media, there was a big debate over the Vietnam war. There were the hawks who said that if we continue to fight harder, if we’re more violent, and so on and so forth, then we can achieve the noble end of defending South Vietnam and the free people of South Vietnam from communism. And then there were the doves who said it’s probably not going to work, it’s probably not going to be too- it’s going to be too bloody, and it’s going to cost us too much, and therefore we’re not going to be able to achieve the noble end of defending the people of South Vietnam from communism.

Now, again, there’s another view, and that is that we were attacking South Vietnam. That other view has the merit of being true, obviously true, but it was inexpressible. That’s outside the spectrum of debate. You can enter the debate only if you accept the assumption. And if you check the media over the entire period as far as I can see — I’ve- Hermann and I in this book review the media from about 1950 to the present on Indochina, and I don’t think you can find an exception to this, even statistical error — that’s the spectrum, you’ve got to accept it.