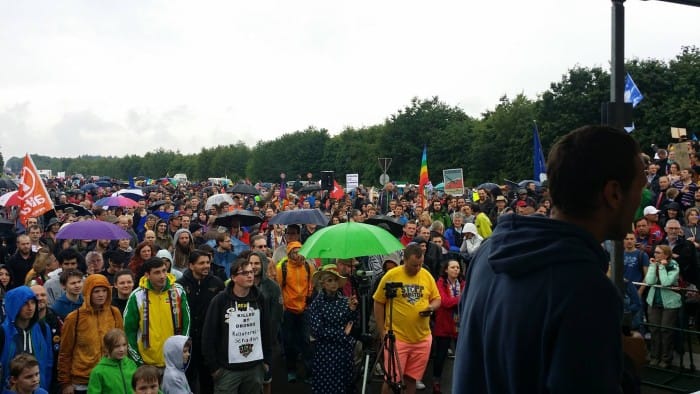 On the 11th of June 2016, demonstrators under the banner “Stop Ramstein: No Drone Warfare” organized a variety of direct actions against the US Air Force base in Ramstein as well the global arms trade. The goals of the protesters were to exert political pressure on the government to change its foreign policy stance and to increase awareness on issues that surround it. According to the organizer’s website:

“Those that sow war, will reap refugees”

The demonstrator’s goal was to send a strong signal on this day as they are convinced that the majority of people in Germany do not want to be part of perpetual warfare. They deny the official justification coming from Berlin and NATO, that the US Air Force base in Ramstein successfully combats terrorism worldwide and ensures stability and security. They claim that such military bases have only served to increase tensions with nuclear armed states such as Russia and China and are fueling an arms race with them. Furthermore demonstrators link the “war on terror” with the rise of terrorism and refugees worldwide considering it a primary driver.

The activity which captured the demonstrators drive for peace was a symbolic gesture in the form a human chain, which stretched from Kindsbach over Landstuhl at the Airbase till the center of Ramstein. The organizers state that 5000 people took part in this protest while the police estimates between 2500 to 3000.

In this video, Noam Chomsky, Joseph Gerson and John Lindsay Poland talk about the US foreign policy apparatus that includes US military bases worldwide and the drone program.

The protest actions organized by “Campaign Stop Ramstein: No Drone Warfare” on the 11th of June 2016, took place in various locations and times: 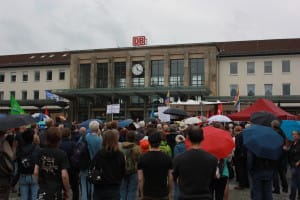 The demonstration was officially opened at the central train station in Kaiserslautern by Oskar Lafonatine at 11 AM. Other speakers included: 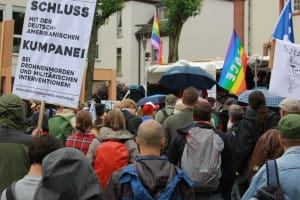 Following speakers addressed the demonstration at the Ramstein-Miesenbach Marketplace:

Following speakers addressed the demonstration at the Landstuhl City Hall: 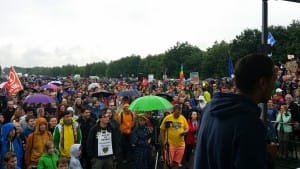 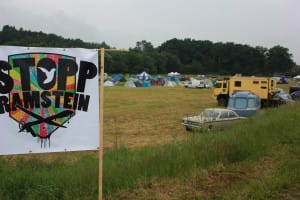 A Peace camp was also organized as part of the protests near the Ramstein Air Force base. The activity was highly organized from the logistical to the operational part – everyone who participated in these camps knew exactly how to proceed. The peace camps were active from the 8th of June  till the 12th of June 2016 and were attended by hundreds of activists.

Background:  The US Ramstein Air Base & Drone Program

According to the Bureau of Investigative Journalism, US drone operations have claimed the lives of circa 8215 humans and injured circa 240, which activists and human rights advocates cite as a reason for rising terrorism and militarization. They refute the claim of the United States and its allies that these drone operations have made the world more secure and consider it illegal under international and domestic law as well as fundamentally immoral.

A report by Niklas Stephenson.