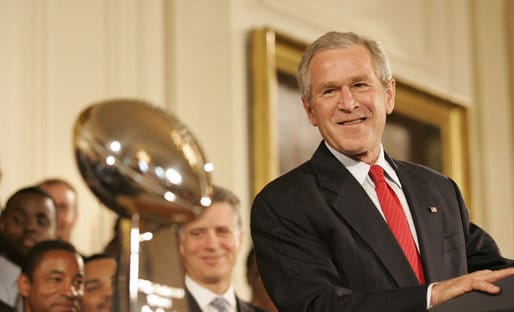 Don’t be fooled by the watercolors; he’s still responsible for the death of a million Iraqis.

So, he’s back. George W. Bush leaves his Dallas attic and his paintbrushes to visit the television studios. He has a book to flog—Portraits of Courage: A Commander in Chief’s Tribute to America’s Warriors.

Since he left the White House, Bush has taken refuge in his canvases, on which he has painted the faces of about 100 of the veterans he sent to war. “I was thinking of their stories, their troubles, their joys,” he told Sandra Sobieraj Westfall of People magazine in one of the many fluff pieces that have come out on his book tour.

On Ellen DeGeneres’ television show, Bush spoke with evident sentimentality about his close relationship with Michelle Obama. “She likes my sense of humor,” said the ex-president. Pictures of Obama hugging Bush are not uncommon on social media. It is as if her hug is a sign of his rehabilitation.

Bush has been reticent to talk politics, but seems to have made an exception in the Trump years. This is personal. Trump not only belittled Bush’s brother, Jeb, but also his mother, Barbara, and Trump suggested that Bush’s war on Iraq was a fiasco. George W. Bush came out of retirement to stump for Jeb in South Carolina. He intimated that he would not vote for Trump. During his book tour, Bush made critical noises about Trump’s immigration policies and his attack on the press. “We need an independent media to hold people like me to account,” Bush told Matt Lauer with a smirk.

Dismay at Trump’s presidency is allowing for the rehabilitation of George W. Bush. It is now a cliché for people to say that they look back longingly at the Bush years as an antidote to the harshness of Trump. In November 2016, Mehdi Hasan of al-Jazeera wrote an op-ed in the New York Times called “Why I miss George W. Bush.” Hasan considered Bush’s statements after 9/11 where he distinguished between Islam and terrorism. The “miasma of anti-Muslim hate and fear-mongering” of the present, Hasan suggested, made Bush admirable.

Certainly, Bush made favorable noises after 9/11 about the difference between Islam and terrorism. But Bush’s policies of war in West Asia, notably Iraq, and his rhetoric of warfare collapsed any possible distinctions. One forgets that on October 6, 2005, Bush gave a speech to the National Endowment for Democracy where he discussed the “murderous ideology of the Islamic radicals,” which he called the “greatest challenge of our century.” Such language dovetailed with the gurgle in the sewers of American fascism, which had incubated the term “radical Islamic extremism” (preferred by Donald Trump), and with the snarls in the Republican Party, which used the term “radical Islam” as an explanation for all the world’s ills.

It is one thing to curl one’s lip in disgust at ISIS and to sneer at the Eastern maladies of dictatorship and religion that seem to curdle the social worlds of West Asia. It is another to acknowledge the authorship of the United States in the destruction of nations in the region, and its role in the incubation of groups like ISIS. How does one even begin to consider that Bush—the instigator of the destruction of Iraq—is now considered to be an avuncular figure among liberals?

It is a sign of his own anxiety that Bush decided to paint veterans. Perched in his study, he must ponder the cost of the war on those who wear the uniform of the United States. But there are no paintings of Iraqis, civilians, or soldiers. There is no mention of the million Iraqis who died as a consequence of Bush’s decision to conduct what the UN Secretary General Kofi Annan called an “illegal war.” Not one of the profiles in courage includes the Iraqis who collaborated with the U.S. occupation and now find themselves unable to enter the United States as a consequence of Trump’s Muslim ban.

Illegal war: On 15 February 2003, 15 million people marched across the countries of the world to protest the anticipated U.S. war against Iraq. This was the largest known protest in world history. Our slogans warned not only that the war was illegal, but that it would have a catastrophic impact on West Asia. We were ignored. When asked about this protest on March 6 by Fox News’ Jim Angle, Bush brushed aside any warnings. “We will respect innocent life in Iraq,” he said with a straight face. At that time, UN Secretary General Annan was silent about the illegality of the war. A year later, on BBC, Annan said, “I have indicated that it was not in conformity with the UN charter from our point of view, from the charter point of view, it was illegal.”

Horrendous war: The U.S. opening salvo against Iraq followed the “shock and awe” doctrine. Harlan K. Uliman, who developed the theory, told CBS’ David Martin, “You take the city down. You get rid of their power, water. In two, three, four, five days, they are physically, emotionally and psychologically exhausted.” A Pentagon official said at that time, “There will not be a safe place in Baghdad. The sheer size of this has never been seen before, never been contemplated before.” Hundreds of cruise missiles rained on Baghdad and other Iraqi cities, 400 on the first day and a comparable number on the second. UN Assistant Secretary General Denis Halliday said at the time, “The United States and Britain are proceeding with plans to annihilate Iraqi society, a catastrophe that would be heightened by the threatened use of tactical nuclear weaponry.” In fact, the U.S. used depleted uranium shells, which in Fallujah produced cancer rates higher than in Hiroshima after the nuclear bomb.

Destruction of the State: When the United States occupied Iraq, it systematically—and against the Geneva Conventions—dismantled the state. Bureaucrats of the ministries and officers of the military were fired, and U.S. officials arrived to privatize Iraq to the benefit of multinational corporations. On May 27, 2003, Defense Secretary Donald Rumsfled wrote in the Wall Street Journal that Bush wanted to “favor market systems” and “encourage moves to privatize state-owned enterprises.” There was to be no Iraqi vote on these moves. They were to be dictated by the United States, which would also deliver a Constitution for Iraq. As Rajiv Chandrasekharan’s Imperial Life in the Emerald City documents, the White House sent “loyalists” from the Republican Party to help privatize Iraq and hand it over for profit. The country was to be gutted. And it was.

Torture Occupation: When the Iraqi insurgency broke out against the occupation, the United States found itself ill-prepared to tackle the rise of Iraqi patriotism. Harsh torture, as at Abu Ghraib, and massive violence, as against the city of Fallujah, defined the U.S. reaction. A defeated and captured Saddam asked to negotiate. If he had been treated with some dignity and allowed to bring in his followers, the insurgency might have been quelled. It would have been possible, at that time in December 2003, to allow the various sections of Iraq to come together. But instead the U.S. occupation used sectarian divisions to consolidate its fading power, breaking Muqtada al-Sadr’s attempt at Shia-Sunni unity, building up the most sectarian forces against each other and delivering Saddam’s loyalists to the more hardened extremists who would appear (such as later, ISIS). Iraqi society, fragile during the sanctions years of the 1990s, broke under the pressure of the U.S. occupation.

Producing ISIS: The U.S. occupation forces decided to cut agricultural subsidies, which tore into the livelihood of farmers in northern Iraq. In Diyala province, farmers hastened to the insurgency. “Americans will be kicked out,” said Saad Adnan, one of the farmers. It was in Diyala and Anbar that the farmers would later join the Islamic State of Iraq, which was formed in 2006. This is the parent of ISIS. It is convenient for the U.S. to claim that ISIS is a Syrian group. Its Iraqi history links it too closely to Bush’s illegal war. Part of the rehabilitation of Bush and his war is to avoid this connection.

When Bush went to Iraq in 2008, Iraqi journalist Muntadhar al-Zaidi threw his shoes at him and yelled, “This is a farewell kiss from the Iraqi people, you dog.” In Tikrit, Saddam’s hometown, Laith al-Amari designed a statue of a shoe to honor al-Zaidi’s message. It had to be taken down almost immediately. The Iraqis have a greater right to define how Bush is remembered. Their art is sharper than his. Their message more moral. 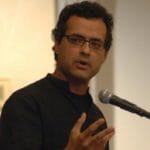 To watch our videos with Vijay Prashad, click here.