In the following video Jessica Desvarieux from The Real News Network interviews Michael Hudson and provides a context to the ongoing US-NATO border confrontations with Russia. Michael Hudson is a Distinguished Research Professor of Economics at the University of Missouri, Kansas City. He is the author of The Bubble and Beyond and Finance Capitalism and its Discontents. His most recent book is titled Killing the Host: How Financial Parasites and Debt Bondage Destroy the Global Economy.

These and other questions are addressed in the video below:

For the full transcript of the video click here.

Noteable excerpts from the video:

Michael Hudson on whether or not Europe needs protection:

Well, as soon as Obama made those words, there was a fury of European statements saying that Obama and NATO was making Europe less secure. The French prime minister, Francois Hollande, says that we don’t need NATO. NATO has no role to play in our Russian relations. That leaders of the two major German parties, both the Social Democrats and the Christian Democrats, said that NATO was warmongering. Gorbachev came out and said the world has never been closer to nuclear war than it is at present. William Perry, the former head of the Pentagon in the mid-90s, said that NATO was threatening and trying to provoke atomic war in Europe.

Michael Hudson on the possible interests behind upholding this narrative:

Well, one of the points made at the NATO meetings was NATO urged countries not to rely on Russian weaponry. There was an insistence by Obama that the NATO countries spend 2 percent of their GDP on NATO, on arms, mainly by buying arms from American military manufacturers, Raytheon, Boeing and the others.

Now, look at what’s happening in Europe. It’s not even growing 2 percent because of the austerity that’s being imposed on it. So 2 percent is the entire annual economic growth in Europe. This large amount has to be spent on American arms. So it turns out that this sabre-rattling to Russia merely means, is a means of obliging the European countries to pay the United States arms manufacturers for goods, and to basically hold you up, Europe up for ransom, saying if you don’t be a part of this, we’re not going to defend you, and Europe is saying, well you know, we really don’t need defense. We’d rather have an economic relationship with Russia. Especially the Germans say, we don’t want the sanctions. The Italians say, we don’t want the sanctions. We don’t want you to make money off Russia. Buy from us, not from Russia. Buy your agricultural goods and your other goods from us, from countries in the dollar orbit, not from the Russian orbit.

Michael Hudson on possible policy adjustments to de-escalte the situation:

Essentially to dissolve NATO, which France has been pushing now for many years. There’s no need for NATO now that there’s no threat of any military invasion anymore. Remember after World War II, NATO was put up when there was a thought that, well, the first idea is European countries should never go to war with each other again. There will never be war between France, Germany, Italy. That’s been solved. There’s no way in which European countries would go to war. 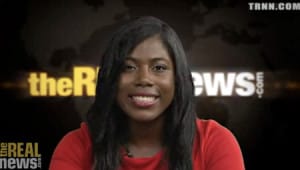 Jessica Desvarieux is a producer and correspondent for the Real News Network. She covers politics and foreign affairs.