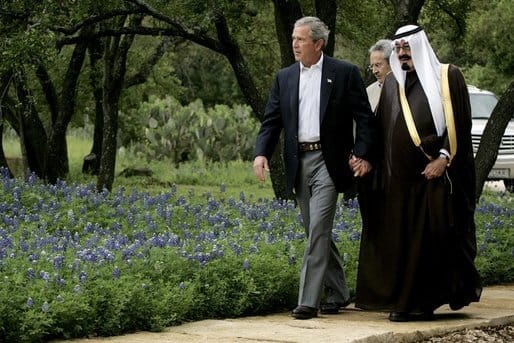 In the following video Paul Jay from The Real News Network interviews former US Senator Bob Graham. Graham chaired the “Joint Inquiry into Intelligence Community Activities before and after the Terrorist Attacks of September 11 2001” that investigated the activities of the U.S. Intelligence Community in connection with the September 11, 2001 attacks. In this interview Graham talks about his findings on the failures and negligence of US intelligence services before the 9/11 attacks, the role of Saudi Arabia, the 28 redacted pages of the 9/11 report and many other topics that are seldom talked about in the mainstream historical literature as well the press.

These questions and many more are adressed in the following video:

VIDEO: Investigating the Saudi Government 9/11 Connection and the Path to Disillusionment

Bob Graham about the active role of the Saudi Government:

Their active role, and how our perspective role on that active role would be different if there was an acceptance of the fact that Saudi Arabia was essentially a co-conspirator in 9/11, how much that would change the way in which, particularly in the current milieu of events in the Middle East, Saudi Arabia is being viewed.

Bob Graham about his path to disillusionment:

I grew up with the idea that the president was almost a divine figure, that he was the literally the father of the country and always acted in a way that was beneficial to the mass of people in America. I had very high reverence that you may have disagreements with the current occupant of the office, but the presidency itself was a benighted position deserving of your respect and worthy of your confidence. So when I got involved particularly at the national level in the U.S. Senate and saw some of the things that were happening–which were not theoretical; they were things that I was dealing with on a very day-to-day hands-on basis that were contrary to that view of what was the presidency–it was a very disillusioning experience. And maybe some of the comments that I make in the book Intelligence Matters reflect that path to disillusionment.

Bob Graham about the 28 redacted pages of the 9/11 Report:

There were 28 pages in the final report, out of over 800 total, which were totally censored from–that were one to the end of that chapter. That was the chapter that largely dealt with the financing of 9/11, who paid for these very complex and in many instances expensive activities that were the predicate for 9/11. I was stunned that the intelligence community would feel that it was a threat to national security for the American people to know who had made 9/11 financially possible. And I am sad to report that today, some 12 years after we submitted our report, that those 28 pages continue to be withheld from the public.

Secondly, acTVism Munich will gain full access to the German Federal Press Conference in Berlin starting late August. This will provide us an opportunity to pose critical questions directly to the German government which will foster awareness on a host of issues seldom discussed in the mainstream media. The attempt is to translate and synchronize the Q&As into English as well. We lack technical and financial resources to translate the events and press conference mentioned above. Furthermore, we will only be able to attend the press conference once every 3 months due to the high costs of travelling and lodging.

Lastly, acTVism Munich received Edward Snowden’s confirmation on his participation in a future event known as “Freedom & Democracy: Global Issues – Connecting the Dots”. In this event we plan to bring leading experts together to discuss the connections between various issues and reveal the system at work. We believe that we can only arrive at viable solutions by increasing public awareness of the principal and structural faults of our system. More details to this event will follow in August. We lack the necessary financial and technical resources to execute the projects, trips and events mentioned above. Since we are a non-profit and independent media outlet that has a strict policy against accepting advertisements, government or corporate support – we depend only on you, the public. These projects depend on you – please support us today by donating via PayPal or Bank transfer by clicking here.