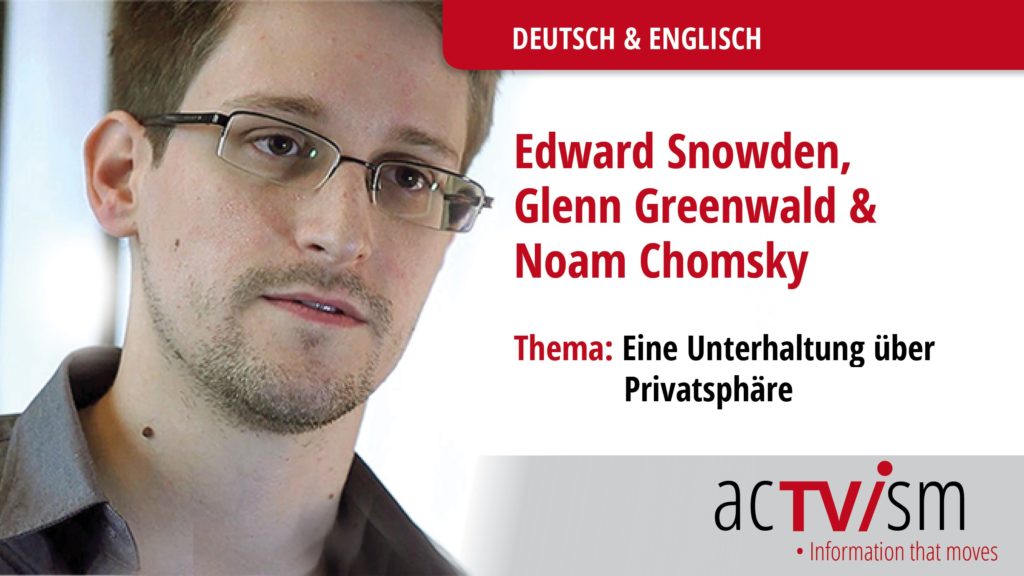 The full Translation: Snowden, Chomsky & Greenwald – A Conversation on Privacy

The full Translation:  Snowden, Chomsky & Greenwald – A Conversation on Privacy

In March of 2016, acTVism Munich contacted the University of Arizona College of Social and Behavioural Sciences for permission to translate an event called “A Conversation on Privacy” which hosted Edward Snowden, Glenn Greenwald and Noam Chomsky into the German language with the goal to create awareness on the issues discussed on a global scale.  We successfully received permission to translate and republish this event, and we are now happy to announce that our volunteers successfully accomplished these goals. It is now now available in German and will be digitally archived by us. Although we have the personnel to translate the content into Spanish, French and Greek as well, we lack the financial resources that would free up the necessary time required to undertake this critical initiative. If you think it is important to translate such discussions into multiple languages in order to create awareness on them beyond the United States, then click here to donate to our current Crowdfunding campaign. Your donation will assist us in pursueing similar initiatives in the future!

Below you will find the original video produced by the University of Arizona College of Social and Behavioural Sciences. For the German version, click on the German flag on the upper right hand corner.

4 replies on “The full Translation: Snowden, Chomsky & Greenwald – A Conversation on Privacy”