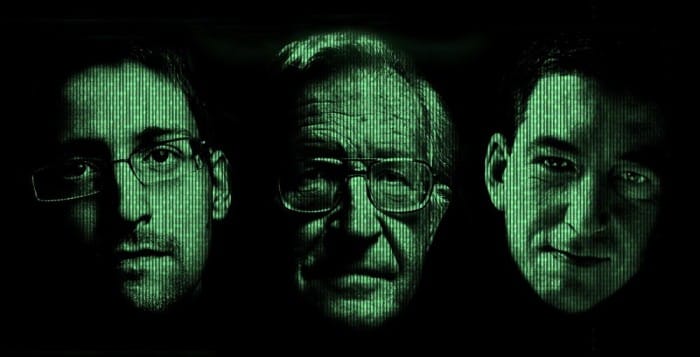 This is the sixth and final video part of an event organized by the University of Arizona College of Social and Behavioral Sciences called “A Conversation on Privacy” which hosted Edward Snowden, Glenn Greenwald and Noam Chomsky.  acTVism translated the entire event, part by part, into the German language. Although we have the personnel to translate the content into Spanish, French and Greek as well, we lack the financial resources that would free up the necessary time required to undertake this critical initiative. Please donate today by clicking here so that we can translate and publish similar initiatives in order to create awareness on a global scale.

To read the full transcript: Transcript Conversation on Privacy Part 6

To see our interview with Edward Snowden, click here.

For more videos with Glenn Greenwald visit our Youtube-Playlist.

View our entire Video-Playlist with Noam Chomsky by clicking here.

Noam Chomsky on the concept of objectivity in journalism:

There is in fact a kind of a concept of objectivity in journalism which amounts to: tell the truth about what‘s going on inside the beltway. So report what the Democrats are saying and what the Republicans are saying but don‘t go outside that. Then you are biased. You are not objective. And what‘s not objective in that sense is very commonly what´s significant. It‘s not just government secrecy that prevents us from seeing what is going on in the world. It‘s our own obedience to the framework of conformity that‘s established in part by things like a good education. We should be cautious about that.

Glenn Greenwald on the power & courage of the individual to change society:

My greatest hope and actually my belief about what will be the most enduring consequence of the incredibly brave and noble choice of and the act of conscience that Edward Snowden made is not necessarily even what we were able to reveal in the story and not necessarily the documents specifically that got revealed but the way in which he teaches the lesson that no matter how much you are without privilege, and position, and power, no matter how obscure you think you are, no matter how powerless you think you are in the face of injustice that all individuals have within themselves the power to stand up to even the most formidable institutions.

Edward Snowden on whether he would have blown the whistle all over again if he could go back in time:

Absolutely. And I wouldn‘t have waited as long as I did.

VIDEO: Support and get to know us!