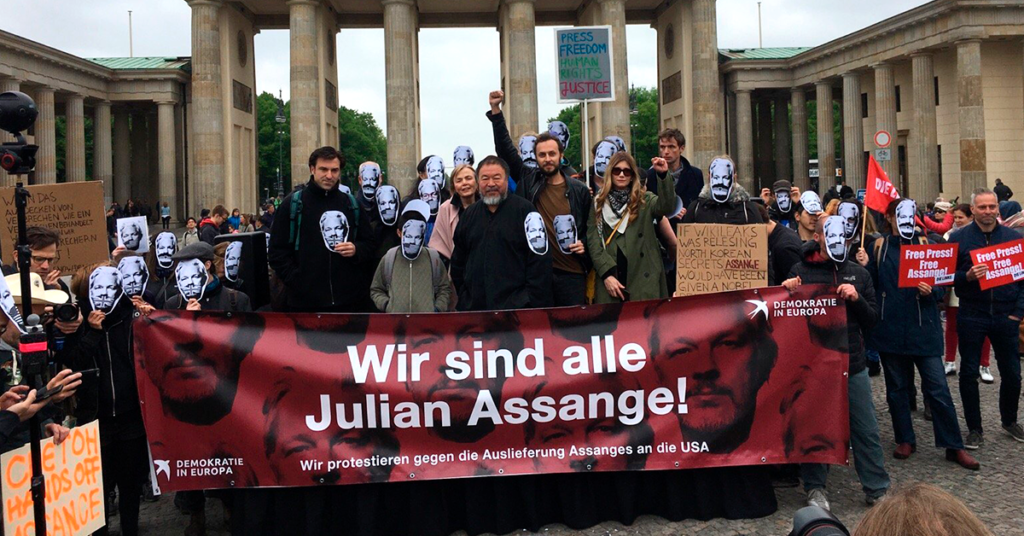 On the 2nd of May 2019 in Berlin at the Brandenburg Gate, a demonstration was organized by the “Democracy in Europe Movement 2025” & “Demokratie in Europa” called “We are all Julian Assange!”.  According the organizers the prosecution of Julian Assange is an attack on press freedoms as it criminalizes the act of journalism as well as of whistleblowing. They also fear that Julian Assange might be extradited from Britain to the United States where he could be charged with the Espionage Act. A Statement from Edward Snowden on the prosecution of Julian Assange was read out by German theatre director Angela Richter and another statement from Yanis Varoufakis was read out by German actor Malte Sundermann. Artists and actors such as Pamela Anderson, Ai Weiwei, etc. also supported this demonstration. Organizations that participated include Democracy in Europe Movement 2025, Demokratie in Europa, Whilsteblower Netzwerk e.V., Die Linke, etc. We were present at the location and documented the activities of the demonstration in the video below:

VIDEO: “We are all Julian Assange!” Demonstration in Berlin – Statement from Edward Snowden

2 replies on “REPORT: “We are all Julian Assange!” Demonstration in Berlin – Statement from Edward Snowden”

Amazing, inspiring video.
It is very uplifting to see that Julian Assange has supporters all across the globe willing to take a stand. Sinister forces work tirelessly to ensure our families and friends think the WORST of Julian. We have to work together to change the public opinion of our hero.
I believe Julian Assange is the single most important Journalist/Publisher in modern history and his persecution reveals the true state of affairs in terms of Freedom of Press and Freedom of Speech.
Keep up the great work, Activism.org! ?
#FreeAssange

Here is another cogent article by Courtenay Barnett, a well thought out and stated overview and assessment of the Julian Assange case, one of the most crucial cases of our time, in which at issue is whether the UK and the US are already functioning fascist states joined at the hip or still have some hope as independent democracies.

A SPEECH FOR JULIAN ASSANGE