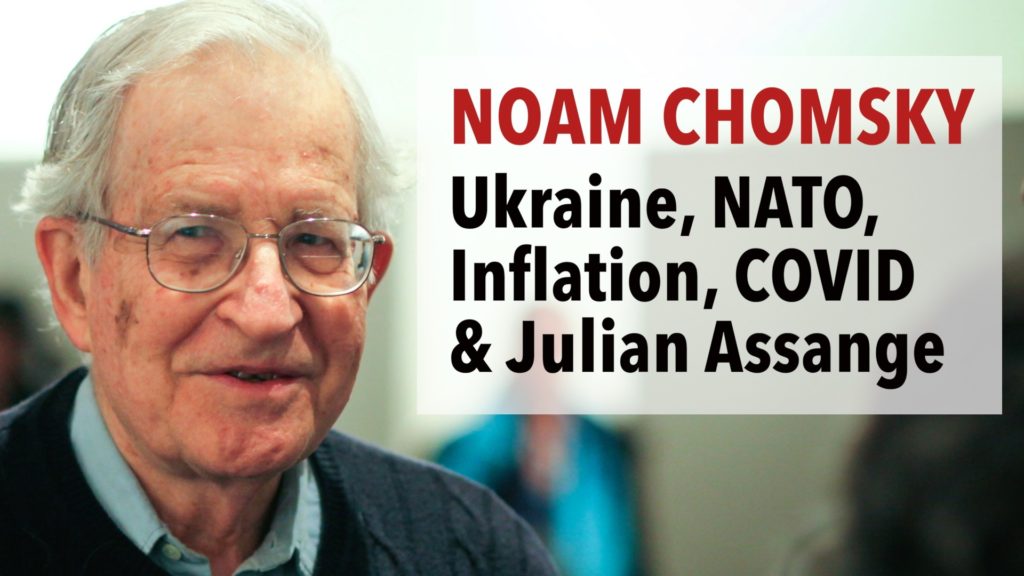 In this interview with world-renowned political dissident, anarchist, linguist, author, and professor emeritus at the Massachusetts Institute of Technology, Noam Chomsky, we discuss the war in Ukraine and the role of NATO. We also examine the cases of two journalists, Shireen Abu Akleh and Julian Assange. Finally, we assess the causes of the inflation that is currently engulfing the world and also look at COVID policy.

OUR PAST VIDEOS WITH NOAM CHOMSKY:

VIDEO: The Untold History of U.S. Hegemony & Influence in Europe

Talking about NATO bombing of Belgrade. How about spearheading that with the story of how Serbia acted after the separation of the federal republics of Yugoslavia and the ensuing war with Slovenia, Croatia, Bosnia and so on? Forgetting about that, are we? Who had pushed Serbia to go to war in the first place? Was it NATO? Should separationism of federal republics invoke war against that kind of separationism?

Secondly. Popular uprisings as a solution to spreading human values and freedoms. Who is repressing, suppressing and destroying those uprisings? Is it USA and/or Western powers?

Thirdly. Aren’t those systems that you Chomsky are supporting, like Cuba, China, Russia and so on, propaganda authoritarian regimes that seem like they were taken from the 1984? How do you envision those populations to liberate themselves out of such systems without some kind of resistance? What about Syrian, Egyptian and so on popular resistances? How did that go? Who helped to crush those resistances?

Fourthly. How do you argumentatively support regimes that are basing their sovereignty upon pure hate of American politics instead of something inherently positive for their own peoples?

Five. How does economic help for the authoritarian regimes help transforming those regimes towards the democratical, humanistic, freedom-like way? Did helping China economically achieve that in China and abroad?

Six. Are you saying that the caste system in India before the English colonialism was a more fair and a better system than the horrible English one? Do you even believe there was a CASTE system and that such a system, is the most horrible idea of a system ever created?

Seven. Do you differ between democratical imperialism (that is supposedly cultural only) and authoritarian imperialism that could also be called the way of the kings and queens we had finally removed with great pains in Europe about hundred years ago?

Eight. The way of the kings and queens. Isn’t it exactly that kind of imperialism, wannabe multiethnic political system the most dangerous possibility for the physical land expansionism? Think about Ottoman Empire, Russian Empire, Persian Empire, European Empires and so on. What about the terrorist groups land expansionism? Are those threats imaginary? Think about Nigeria. Should we forget about those and just leave them be?

Nine. Do you support a potential overtaking of Taiwan by the Chinese military and political forces? Is there any need for China to be creating ever more and ever bigger military? In your mind, do you think that there ever was a NATO threat against China?

Ten. Have you ever heard of a successful peoples liberation from the chains of tyranny or war for that matter, without, I don’t know, weapons? How does a Europe without a military, help those peoples that want to live in a democracy? How does accepting all those immigrant peoples in Europe help, the countries they are escaping from, to transform those to a more democratic, free ones? Have you seen examples of Russia, China, Iran helping countries to become more democratic in some way? Or are you saying that personal and peoples freedoms in those authoritarian countries here listed are superior to the democratic systems? How did Chinese influence in Serbia help Serbia deciding for condemnation of ILLEGAL Russian invasion against a former federal independent USSR country of Ukraine?

Twelve. Allowing for the enslavement of a part of Ukraine for the next X years, is gonna help the world in what a way?

Thirteen. Do you in any way support monarchic, dynastic or tribal regimes? Why? Is former socialism and/or communism in support of such regimes? How is it then that former socialist and communist regimes are becoming more or less dynastic?

Fourteen. If the Western world really tried to suppress India, China, UAE, Saudi Arabia and so on… how are they becoming ever greater powers? Are you saying that Western powers are deliberately (and not because of the needs on the ground) supporting creation of authoritarian regimes and actively suppressing creation of democratic regimes? How is it then, that the democracy in the world is growing?

Thanks. I hope we will get some answers to those questions.