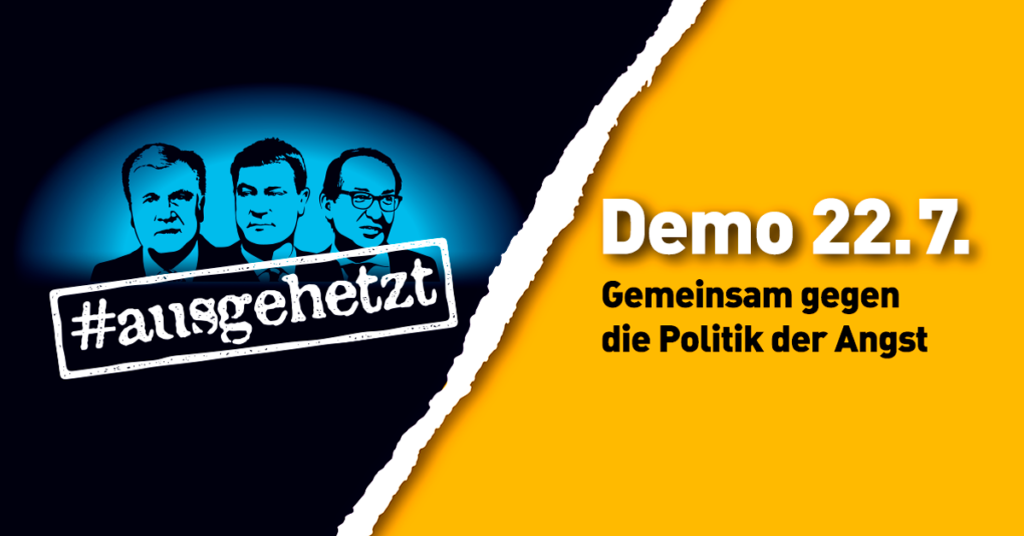 Event Tip: Demonstration on the 22nd of July – Together Against the Politics of Fear

Event Tip: Demonstration on the 22nd of July – Together Against the Politics of Fear

The AfD is not the only party that employs fear mongering, hatred, and exclusion in their politics. In Bavaria and Berlin, the Bavarian government’s election-campaign agenda increasingly bends towards the influence of undemocratic, right wing populists, and shows little regard for human rights.

We are people from different associations and civil society activities. We come from ecclesiastical groups; we do volunteer refugee work; we are labor unions and social associations; we are schools and universities; we are the anti-war and environmental movements; we are queer and feminist groups.

This is a call to action against society’s massive shift to the right, the surveillance state, the restrictions on our freedoms and attacks on human rights. We call for a protest on July 22. against the politics of fear.
More than 80 various organisations signed our Statement against the irresponsible policy of splitting of Seehofer, Söder, Dobrindt and Co.

Four opening rallies unite to form a common train and illustrate the diversity of the alliance:

1. Goetheplatz (1 p.m.): Start of the groups that deal with migration and asylum and oppose racism and war → Demo to the southern Theresienwiese

2. Southern Theresienwiese (13:30): Start of the alliance “noPAG – No to the Bavarian Police Task Law → further on to the DGB-Haus

3. DGB House (14:00): Start of all those who come from social conflicts (housing shortage, poverty among the elderly, care state of emergency, precarious working conditions)
→ further to Karl-Stützel-Platz

4. Karl-Stützel-Platz (14:30): Start of the people whose focus is the equal treatment of all genders and sexual identities  → further to Königsplatz

INFO: Demonstration “Together Against the Politics of Fear”

United for Human Rights and Democracy is a private Initiative of volunteers, part of the large community of people engaged in refugee aid in Munich.

6 replies on “Event Tip: Demonstration on the 22nd of July – Together Against the Politics of Fear”