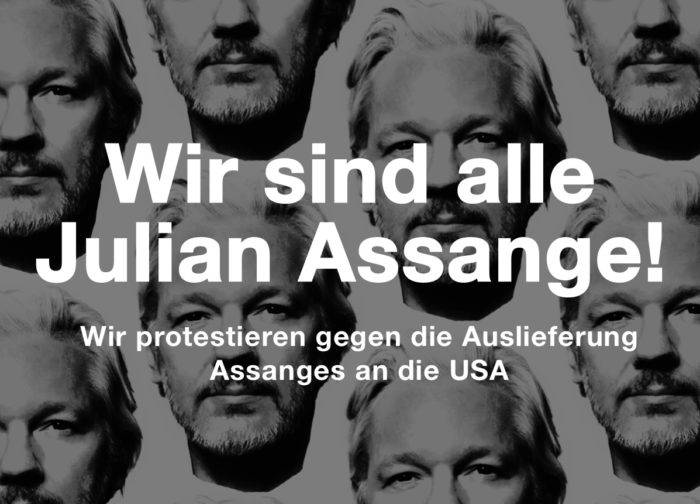 Public Protest on the 2nd of May in Berlin: “We are all Julian Assange!”
Author: DiEM25 – Democracy in Europe Movement 2025
“There was a dream of what Europe could be, and that is a dream that Europe has lost, and the lack of that dream is producing its fragmentation, it permits rogue states in Europe, states that compromise the genuine interests of the European people (…) that collapse in the dream of Europe is something that cannot be permitted, we must fight against it. Otherwise, winter is coming, war is coming, the end of Europe is coming, and either we must seize the day, and divert Europe from the cause it is on… or else we will have to suffer through a very harsh night.”
On the day of the first extradition hearing in London’s court, we are inviting you to join the public protest DiEM25 and Demokratie in Europa will be staging at one of Germany’s most iconic monuments: the Brandenburger Gate.
On Thursday, May 2, 2019, we will demonstrate just a few meters away from the UK and US embassies – the two countries that hold the future of WikiLeaks founder and DiEM25 Advisory Panel member Julian Assange and freedom of press in their hands.
As we already know from Edward Snowden’s relevations on NSA spying on Germany, the sovereignity of Germany – its journalists and the privacy of its citizens – is also under threat. The May 2 court hearing in London is more than just about Julian Assange. It’s about our right to know. It’s about you and me.
And while Chelsea Manning remains in prison, precisely because she rejected to testify against WikiLeaks, the protection of whistleblowers has never been more important – and urgent, all across Europe, including Germany. The stakes are global.
It’s highly likely that the US is preparing to file more charges against Julian. The current indictment is but an attempt to criminalise long-established source protection practices and journalists working with whistleblowers aiming to disclose classified information for the public interest.
Scores of press freedom organisations, news outlets, United Nations representatives, politicians and public figures have denounced Julian’s arrest and his possible extradition and have warned of its worrying implications.
Whatever the outcome of the court hearing, the very fact that Julian is being kept in solitary confinement at the “British Guantanamo” Belmarsh prison, is enough for us to gather at the Brandenburger Gate to protest against the inhuman conditions he is facing now and to loudly say Stop the extradition of Julian Assange!
The “We are all Julian Assange!” protest will begin at 12:00 with speeches by Srećko Horvat, Croatian philosopher and DiEM25’s co-founder, German theater director Angela Richter, Whistleblower Network chairman Annegret Falter, investigative journalist and author John Goetz and biologist and founder of EcoLeaks Esteban Servat. The speeches will be followed by a reading of a short statement by Edward Snowden brought by Angela Richter from Moscow to this special DiEM25-led public demonstration.
For Edward Snowden, our demonstration is not just about “a man who stands in jeopardy, but the future of the free press” (quote from statement to be released on May 2)
And last but not least, a message from Srećko Horvat to the German public: “We’re in the month of European elections, a historic event for Europe: don’t vote for any party that is not ready to stand in the protection of whistleblowers, freedom of press, and, more specifically, to oppose Julian’s extradition to the United States.”

INFOS: We are all Julian Assange!