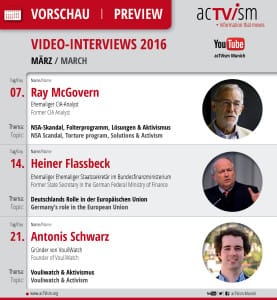 For March 2016, acTVism Munch will start off by releasing an interview with former CIA-Analyst (27 years), Ray McGovern, who will talk about his experience in the agency and the reasons that led him to become an activist and outspoken critic of the US government. The interview surfaces a number of issues that include: “Enhanced interrogation techniques” a euphemism for the U.S. government’s program of systematic torture, the role that European governments played in supporting this program, Edward Snowden & the NSA affair, the significance of activism in today’s day and age, etc. On the 14th of March, we will release the first instalment of our mini-video series with Heiner Flassbeck that was recorded in our event “Germany’s role in the European Union & International Affairs”. In this mini-video Prof. Flassbeck will surface Germany’s role in the ongoing economic and financial crisis that is engulfing the European Union. The last video of the month is an interview with Antonis Schwarz, founder of Vouliwatch. Vouliwatch aims to promote transparency and political participation in Greece. Antonis will talk about how he began his journey, how others can start similar initiatives and what considerations one must take into account when starting a grassroot initiative.