Brief summary of the treatment of whistleblowers in the United States:

The US government, especially during the tenure of President Obama, has come down hard on whistleblowers.  According to Glenn Greenwald:

When it comes to low-level government employees with no power, the Obama administration has purposely prosecuted them as harshly as possible to the point of vindictiveness: It has notoriously prosecuted more individuals under the Espionage Act of 1917 for improperly handling classified information than all previous administrations combined.

Although the second US Circuit Court of Appeals in New York ruled in May 2015 that the NSA dragnet collection program exposed by Edward Snowden was illegal and was followed by a 2015 report produced by a U.N. envoy tasked with safeguarding free speech around the globe in which it declared that whistleblowers are a crucial element of a healthy democracy, the Obama Administration continues to maintain its position.

In the video below, Annie Machon explains what it means to be a whistleblower and how the public can support them:

Whistle-blowing itself is a very strange process, it’s very exciting and you feel very energized when you are building up to doing it. When you are caught up in the story every one wants a piece of you and asset-strips you of the information and afterwards you are left with nothing… what you do? You have no job, no reputation, potentially in prison, no income. That’s the bit where people needs support particularly and it’s just following these cases and getting involved in their works.

And you know, it doesn’t always has to be at that Edward Snowden level, it can be local town government, it can be health, it can be banking, it can be whatever. But just to make this concept normalized because I do think that failing adequate transparency and failing a really effective media that should do its job and hold power to account, whistle-blowers from whichever sector will be the regulators of last resort for all of us and we, we really need to honor everyone who comes out of whatever sector and turns their life upside down to do what they do.

In this video, acTVism provides a voice to a number of whistleblowers who share their personal experiences and the consequences they had to face once they decided to expose illegality and wrongdoing in the agencies that they served:

Please support us with a donation today by clicking on the link below: 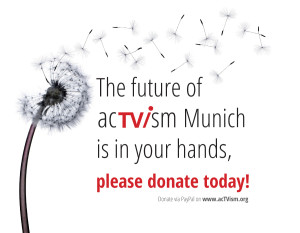