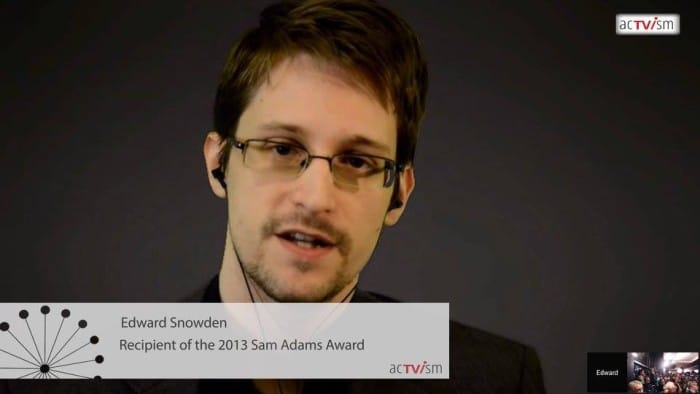 The conference was “entirely public, entirely on the record,” as Ethan Zuckerman, the director of the Center for Civic Media at MIT, said in his opening speech. He concluded by saying: “At a moment when research is forbidden, it’s incredibly important that we find ways to be creatively and pro-socially disobedient.”

You can watch the entire event below.

One of the many speakers during the day was Edward Snowden, director of the Freedom of the Press Foundation. It starts at Minute 38:03.

Topics addressed in his speech are:

Edward Snowden on the difference between the legality and the morality of something:

The guiding theme of many of the talks today, I think, is that law is no substitute for conscience. Our investigation regards countering what we’re calling lawful abuses of digital surveillance. Lawful abuse, right, what is that, doesn’t seem to make a lot of sense. Seems like it might be a contradiction in terms. (…) But if you think about it for just a moment it might seem to be a little bit more clear. After all, the legality of a thing is quite distinct from the morality of it. Segregation, slavery, genocides, these have all been perpetuated under frameworks that said they were lawful, as long as you abided by the regulations that were sort of managing those activities.

Edward Snowden on the high number of journalists killed in the line of duty:

Due to the proliferation of sort of an ancient third party doctrine style interpretation of law, even the most predatory and unethical data collection regimes are often entirely legal. And effectively what this means is that if you have a device, you have a dossier. They may not be reading it, they may not be using it, but it’s out there. Now, why should we care? I can think of 1,070 reasons why it matters. According to the figures of the Committee to Protect Journalists, more than 1,070 journalists or media workers have been killed or gone missing since January of 2005. This is something that might not be as intuitive as you might expect. People go, “well, we’ve had a lot of wars going on, surely it’s combat related. These are combat deaths.” But when you look at these same figures, murder is actually [a] more common cause of death than combat. And amongst this number, politics was a more common newsbeat than war correspondence. Why is this? It’s because one good journalist in the right place in the right time can change history. One good journalist can move the needle in the context of an election. One good well-placed journalist can influence the outcome of a war. This makes them a target. And increasingly the tools of their trade are being used against them. Our technology is beginning to betray us, not just as individuals, but as classes of workers – particularly those putting a lot on the line, at risk, for the public interest. Speaking specifically here about journalists who by virtue of their trade rely upon communication in their daily work. And unfortunately, journalists are beginning to be targeted on the basis of specifically those communications.

Edward Snowden about Marie Colvin who was killed while reporting from Homs, Syria:

We found based on Lebanese signals intelligence collection and some other reporting, that the Syrian army had actually given the order to specifically target journalists, who were breaking sort of a news blackout in this organization.But how did they discover? How did they know where to aim their shells? According to reporting that occurred the week prior, I believe, her family has filed a lawsuit against the Syrian government. And they have evidence alleging that the radio frequency emissions of her communications, that she used to file those news reports, were intercepted by the Syrian army. They used direction finding capabilities to track and locate sort of this illegal, unlawful media center and then walk artillery fire toward it. Walking artillery fire is sort of how you re-aim artillery when it falls short or when it goes farther of where you’re actually trying to hit. You have a spotter somewhere in the city who goes: “Oh you didn’t quite hit the media center, you hit the hospital next door. Move it a little bit to the right, a little bit to the right.” And they heard these shells coming. By the time the second shell hit, they knew they were in trouble. This happened at 6 o’clock in the morning. She was going to grab her shoes, because as is custom in the region you have to enter the house with bare feet. And she was caught by a shell and killed at that point. Now, there’s a question here, among many policy officials, where they go: “was this legal? What processes do we use, to sort of remediate these kind of threats when these things happen? What happens when the policies fail?” And of course this is an argument that the Syrian government itself would say, it’s “misunderstood.” That “these were actually attacks by terrorists,” or whatever, and “if we did these operations they were lawful,” but there’s a larger question of: does it matter? Does it matter whether it was authorized by law or not? Was this a moral action, regardless of whether it is lawful or unlawful. And: are these kind of things preventable? Can we enforce some stronger guarantee of the kind of locational indicators of our activities that we’re putting out there. Perhaps in the case of Marie Colvin we could not. But what about the case of future journalists. What about a journalist who has to meet with source in a denied area. And they don’t want their phone to be shouting into the air, to be giving up some kind of locational indicator of their movements.

Ethan Zuckerman, the director of the Center for Civic Media at MIT, explained that the inspiration for the Forbidden Research conference came from one of Zuckerman’s students, Jeremy Rubin, who, in late 2013, was part of a team that put together a new little technology called Tidbit.

Tidbit was a system that, “instead of forcing you to look at an ad when you read a webpage, grabbed your browser and had you mine bitcoins. And if you happened to turn up any bitcoins they went to the people who had created the content,” Zuckerman explained. “And we thought this was sort of a clever idea, proof of concept. But it turned out that the New Jersey attorney general did not like this idea. And responded to this idea with a subpoena. As a result, Jeremy found himself not working on innovative research, but working on a pretty innovative legal defense.

“This raised real questions about we as MIT – as an academic institution – do, when students and members of our community find themselves in trouble because of research that they’ve taken on. This isn’t just about Jeremy Rubin. This is about Star Simpson. This is very much about Aaron Swartz. This is about people, who’s innovations find themselves pushing the limits, and bumping up against legal issues, different ways of preventing people from answering questions that are deeply important to ask.”