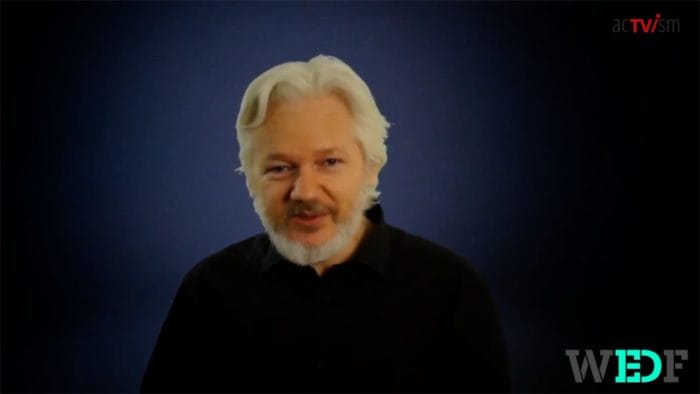 This video was produced by the World Ethical Data Forum (WEDF) and published on September 20, 2018. acTVism Munich republished it today to foster understanding on the issues discussed in this video as well as on the Julian Assange case. This interview was the first time Julian Assange had been heard from after his communication channels were cut off by the Ecuadorian embassy in March, 2018.

The interview proved also to be the very last time he was heard from, as on 11th April 2019, Assange was carried out from the embassy by UK police and taken to Belmarsh Prison on the charge of having breached his bail conditions. He has since spent most of his time in solitary confinement and on January 4, 2021, a British court will decide whether he will be extradited to the United States.

To read the transcript of this video, click here.

To watch our previous updates on this case, click here.

The World Ethical Data Forum is the leading event for impartial and balanced exploration of the urgent ethical and practical questions around the use and future of data.

From the methods and techniques that generate the granular data used by scientists, statisticians and developers to the narratives composed by the media and governments which define them, the forum examines the opportunities and problems arising from the development of technologies that continue to open unprecedented possibilities for knowledge and influence.

Ranging over areas including mass data and data-analytics, their use and safeguards, privacy and data rights, the commercial use of data by marketing, media institutions and big business, as well as the meaning of limits or lack of limits to access for security agencies and government, fake news, the recent impressive innovations in artificial intelligence, and the benefits, pitfalls and future of blockchain technology, each year the forum gathers the most brilliant and influential minds from around the world to address the implications of data and knowledge technologies in all of their complexity.

Encouraging technological and intellectual innovation and collaboration between the worlds of research, business, media, government and investment, and emphasising the quality and integrity of the human lives they ground, the World Ethical Data Forum invites participants to enter and define the most crucial discussion of our time. For more information, visit: https://worldethicaldataforum.org/