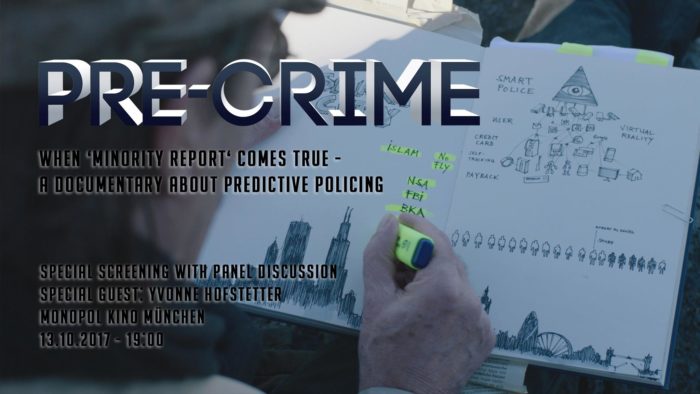 What if the murder of tomorrow could be prevented today?

To predict a future crime scene and to prevent a murder seems like something from a sci-fi movie. It is, but it’s also real – and happening right now. To make this possible, powerful computers and omnipresent cameras capture data from all sources, which is then evaluated and analyzed with the help of algorithms. At the same time, we, the citizens are transformed into carriers of recorded data. PRE-CRIME travels to Chicago, London, Paris, Berlin, Munich and other places to show predictive policing techniques in action, to investigate their opportunities and dangers and to meet people who use them and those who have been victims of them. Who is – and who isn’t – protected by the algorithm?

After the Screening, there will be an open panel discussion with german author Yvonne Hofstetter, an expert on the general issue of human rights violations through Big Data.

ABOUT THE DOCUMENTARY MAKERS

Monika Hielscher and Matthias Heeder have been making documentary films together for more than 20 years.

Their primary focus is on investigative documentaries with strong story-telling; their body of work includes theatrical and TV docs for ARD, ZDF, ARTE and others. They are based in Hamburg, Germany.