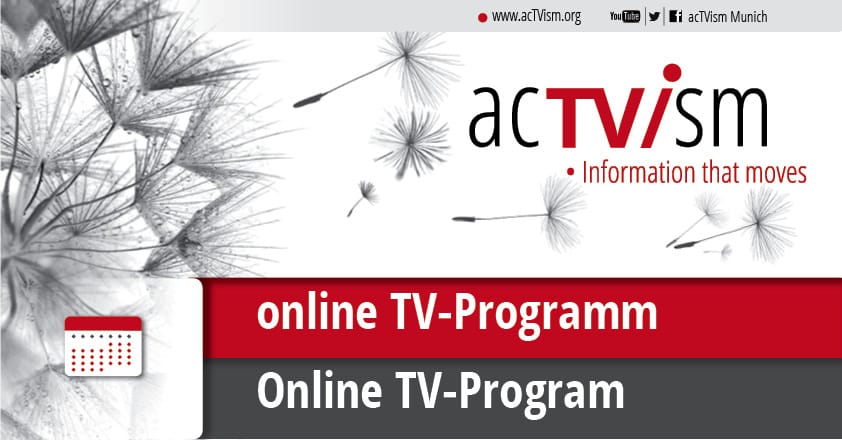 Welcome to our online TV program for July 2016. Here you will find information to our upcoming videos and projects. This month’s video releases include: Edward Snowden, Glenn Greenwald, Noam Chomsky, Sarah Harrison & Wikileaks, Ernst Wolf and Heiner Flassbeck. As an independent and non-profit organization with a very limited budget, we cannot guarantee that we will be able to release the content listed in multiple languages as well as on the dates listed below. Please donate today to support us in the production and publishing process by clicking here.

We will start off July by translating and synchronizing an event into German which was organized by the University of Arizona College of Social and Behavioral Sciences called “A Conversation on Privacy” that hosted Edward Snowden, Glenn Greenwald and Noam Chomsky.

Our second video of the month will include an exclusive interview with Sarah Harrison. Harrison is a British Journalist, investigations editor for Wikileaks and played a decisive role in accompanying Edward Snowden from Hong Kong to Moscow after the highly classified NSA leaks in 2013. What state is Julian Assange living in? How is the legal case against him proceeding and what can we expect in the future? How can we support whistleblowers? All of these questions and many more are addressed in this video.

Our third video will feature German author & journalist Ernst Wolff. Wolff is the author of “Pillaging the World. The History and Politics of the IMF” and will provide us an historical context to the formation of the IMF, the role it played in third world countries and whether it is breaking from its traditional policy given its current position towards Greece.

For our last video of the month, we will release the second part of our interview with Heiner Flassbeck which was recorded during an event that we organized in in Munich called “Germany’s role in the European Union & International Affairs”. In this video Prof. Flassbeck will continue the discussion with acTVism Munich’s journalist, Gideon Gottfried, about the European Union and the role that the Bretton Woods Conference of 1944 as well Germany’s economic policies played in shaping the crisis unfolding today in Greece and other periphery states. What can we expect going forward? What can the individual as well as organizations do to avert another financial crisis? These questions and others will be addressed in this video.

Secondly, acTVism Munich will gain full access to the German government’s national press conference in Berlin starting late August. This will provide us an opportunity to pose critical questions directly to the German government which will foster awareness on a hoste of issues seldom discussed in the mainstream media. The attempt is to translate and synchronize the question and answers in German as well.