The Sensation of “Terror” – Mainstream Media and the Munich shooting

Friday, July 22, was a sad day for Munich and Germany. Thanks to the mobility and technology of the mainstream media we could all take part in the proceedings. This enabled us to experience what actually happened. We could inform and maybe calm ourselves. However, mainstream media wasn’t able to prevent things from heating up as rumors and fear spread. On the contrary, it took part in the speculation and even fueled it, while ignoring reminders by the police on Twitter to not publish pictures of police forces in the line of duty:

The tweet asking not to take photos or videos of police action in English:

The police also asked to not speculate based on assumptions. Presumably to avoid chaos for Munich’s residents:

acTVism Munich published a link to show that N24 did not follow the request of the police. The sensationalist way in which they reported, which resembled the way live sports events are reported, has to be addressed. 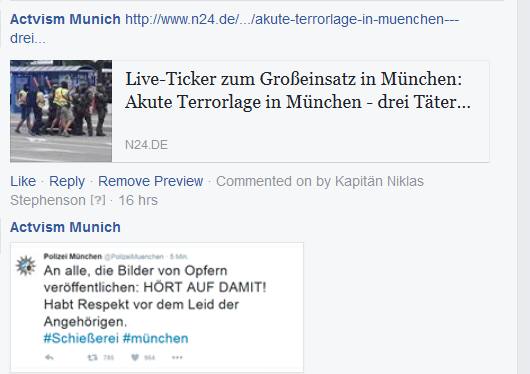 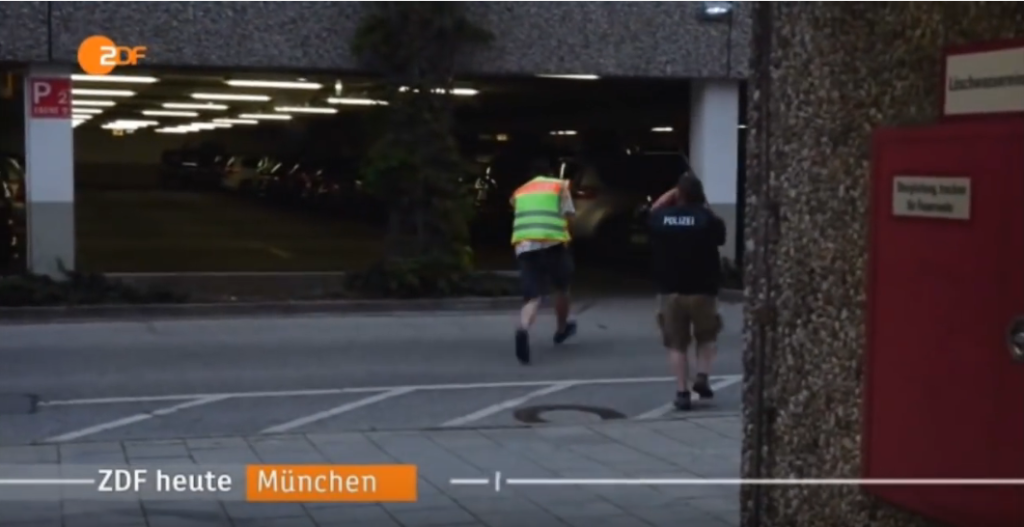 In the defense of Gutjahr one may note that he deleted the Twitter posts. If this had been a “terror” attack, as was continuously speculated by mainstream media, such action could have had consequences for ongoing investigations and operations. As far as we know, the protagonists won’t face any penalty for not following the police’s request. In other words: threatening national security through unfounded action won’t have any repercussions. It’s the kind of absolution a regular citizen will never experience.

Commentary from a member of acTVism Munich’s editorial team:

The situation that was created for a Munich citizen like myself was frightening and filled with chaos. Media discussing false reports for hours instead of informing about the facts. Instead of asking people to remain calm, sentences like “Munich is under attack” are continuously dropped, even by ARD and ZDF [Germany’s main public broadcasters]. Followed by the consulting of terrorism experts, who talk for hours about many different possible motifs and scenarios, planting any catastrophe imaginable in your head and fueling the panicky atmosphere. No matter how often words like “probably, perhaps, possibly” are used, it does not add any positive contribution to the situation. 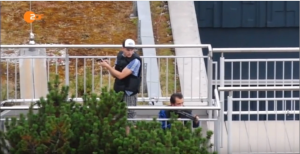 And because a gap with nothing to report is bound to open up, because there was definitely nothing new to report, and because you couldn’t possibly ask the terrorism expert the same question for yet another time, the decision is made to simply show pictures of Würzburg, even though there wasn’t and still isn’t any evidence that there’s an Islamist background. Up to this point all ties are simply speculative. A concrete connection to ISIS couldn’t be established yet. Still, a connection is established between the two acts.

When police announced, that it had been a lone shooter, reports about three possible perpetrators could be seen on TV for another 20 minutes, until, finally, the news was picked up on, with claims that it had only been published “seconds ago.”

Showing covered corpses and injured people wasn’t just disrespectful towards the victims and their families, but another case of ignoring police notices:

To see examples of how N24 and other mainstream media published pictures of the victims, click here. 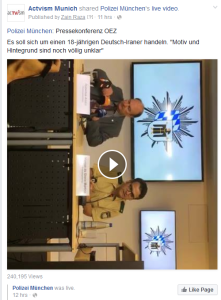 The current facts provided by the Bavarian police:

As has been reported, a shootout took place on July 22 at around 5.50 pm in the area of Hanauer Straße surrounding the Olympia Einkaufszentrum in Moosach. Ten dead people are known of at the moment. Among them is a 18-year-old, German Iranian pupil from Munich, who was found within the frame of the search at around 8.30 pm in Olympiapark. As investigations stand, this was the perpetrator, and he most likely killed himself. There are no hints pointing toward other accomplices. Investigations regarding background and motif of the acts are underway. As part of these investigations, the culprit’s apartment – he still lived with his parents in Neuhausen – was searched at night. Six juveniles and four adults are among the casualties. Ten people, one of them 13 years old, who were heavily injured, and 17 slightly injured are being treated in hospitals. Four people were injured by shots. The others were injured partly while escaping or in panic situations als in other parts of the city.

Forensics were comprehensively securing evidence at the crime scene until the early morning hours. All crime scenes are still barred.

acTVism Munich regrets these events and is solidly united with the victims and their families. Out of respect for the families, relief forces and the city of Munich we won’t be publishing any more recordings of the events. We will only continue our coverage once we have facts.