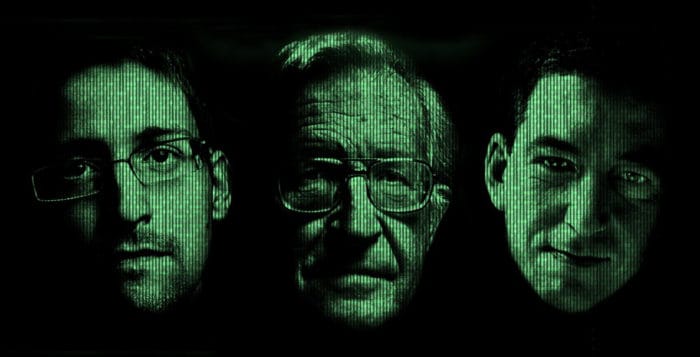 This is the fourth part of an event that was organized by the University of Arizona College of Social and Behavioral Sciences called “A Conversation on Privacy” which hosted Edward Snowden, Glenn Greenwald and Noam Chomsky.  acTVism is translating it, part by part, into the German language. Although we have the personnel to translate the content into Spanish, French and Greek as well, we lack the financial resources that would free up the necessary time required to undertake this critical initiative. Please donate today by clicking here so that we can translate this event and similar initiatives in order to create awareness on a global scale.

Click on the following links to see the previous parts of “A Conversation on Privacy”: Part 1, Part 2, Part 3.

For more videos with Glenn Greenwald,  visit our YouTube playlist.

Notice for the upcoming acTVism Event:

NSA-whistleblower Edward Snowden confirmed his participation for acTVism Munich’s next event called “Freedom and Democracy: Global Issues Connecting the Dots” at Muffatwerk in Munich. Snowden will be taking part via video-conference. In this event we plan to bring leading experts together to discuss the connections between various issues and reveal the system at work. We believe that we can only arrive at viable solutions by increasing public awareness of the principal and structural faults of our system. For more information on the event, click here.

Noam Chomsky on the causes and effects of terrorism:

“If you go back fifteen years to the launching of the so-called War on Terror, terrorism, what we call terrorism was located in a tiny area, tribal areas of what we call AFPAK, Afghanistan and Pakistan. Where is it now? All over the world. Every time you hit it with a sledge hammer it expands. The invasion of Iraq for example. And one of the effects was that in the year following it, terrorism increased by a factor of seven. Intelligence agencies had predicted that it would lead to more terror but that was way beyond. And that continues. There is another possibility and that is to try to get at the roots and the causes of it and try to deal with them. That‘s not dramatic and exciting but it would work. And there is plenty of research that tells us why people turn to terrorism. Take Brussels or Paris. The terrorist acts were carried out by people who lived and grew up there in slums or miserable suburbs. Young people who lived with humiliation, degradation, no hope, some from countries in North Africa where they had been subjected to brutal European atrocities for centuries… …young people who wanted something in their lives. They wanted some dignity, some hope, some excitement, something to look forward to, but they were not going to find it in their own societies. Most of them have very little background in Islam, some of them picked up Islam. This gave them a cause, okay. We can increase that by following the ISIS playbook or you could look at the cause for them and try to deal with them. Take a look at the British in Northern Ireland. Terrorism in England was pretty serious for a long time. Much more than it is now.  Fortunately they didn‘t react by carpet bombing Northern Ireland, following Ted Cruz‘s proposal. They finally, after a long period of doing the wrong thing of reacting with violence, they began to consider the reasons and the causes and to deal with them. And it didn‘t turn into a paradise but it‘s a big difference.”

Glenn Greenwald on terrorism as a justification for mass surveillance:

“Let me just quickly address a couple of specific point in relation to terrorism and surveillance. First of all the key difference is between targeted surveillance and mass surveillance. Nobody disagrees that terror-targeted surveillance is legitimate. That you have reason to believe that certain individuals are plotting violent acts against civilians and therefor you monitor their communications. If that‘s what the US government had been doing, you would have never known the name Edward Snowden, there would never have been a leak. That‘s exactly what they are not doing. What the are doing instead is mass surveillance. They have constructed the largest system of suspicionless surveillance ever created in human history where they are targeting not specific individuals who are likely involved in terrorism but hundreds of millions of people, of entire populations to very invasive scrutiny. One of the things that struck me when I read through the documents was how few of them have anything to do with terrorism. As Professor Chomsky was saying earlier, you read through documents and you are shocked by how little of it has to do with national security.”

Edward Snowden on the actual reasons for mass surveillance:

“When we look at the actual use of intelligence agencies that were using this, we found post 2013, courts have found, that they were using it to spy on NGOs, human rights organizations such as Amnesty. They were capturing the emails of journalists. These programs were going beyond things that were specifically focused on terrorism and they were capturing webcam images off of things like Yahoo video chats. For everyone without any individualized suspicion of criminality. That could be the laptop in your bedroom. And these were held despite the fact that they knew – they had a lot of evidence of sexual activities and other very intensely private activities sitting in a government database that analysts were crawling through, and they did nothing about it.”

We are hosting an event on the 15th of January 2017 which will feature leading experts in Edward Snowden, Jeremy Scahill, Jürgen Todenhöfer, Srecko Horvat, Richard Wolff and Paul Jay, who will talk about various issues (Military Industrial Complex, Political Economy, Mass Media, Activism, etc.) with the underlying aim of providing context as well as solutions. For more infos, click here. Our plan is to live-stream this event on the internet to a global audience and capture it via video to be made available for free on social media. We also hope to translate all the footage into multiple languages to inform people globally and not just from the English speaking world. Please assist us with a donation today to so that we can not only continue our current operations but also fully realize our plans for the upcoming event. Please support us today by donating via PayPal or Bank transfer by clicking here or on the picture below!