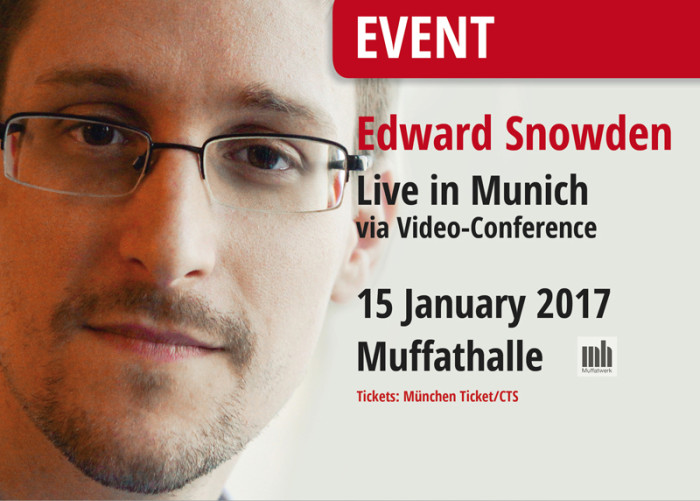 In addition, the disparity between rich and poor is growing ever larger and global society is experiencing the increasing regression of stability and civil rights. The current wars in the Middle East, the possible ignition of a new Cold War, terrorism and surveillance, financial crises, poverty as well as the flight of refugees or environmental catastrophe are all unfortunate and disastrous signs of our time.

Are these events interconnected? Can we see a pattern? Are they taken out of context or completely ignored? We will speak with international experts about supposed structures and connections to find out if and how we can make a change for the better of all.  LIVE IN MUNICH. On the 15th of JANUARY, 2017.

THIS EVENT WILL BE BROADCASTED VIA INTERNET LIVE STREAM FOR FREE. THE LINK WILL BE AVAILABLE ON OUR WEBSITE, YOUTUBE CHANNEL AND FACEBOOK PAGE ON THE EVENT DAY.

Edward Snowden is a former intelligence officer who served the CIA, NSA, and DIA for nearly a decade as a subject matter expert on technology and cybersecurity. In 2013, he revealed that the NSA was seizing the private records of billions of individuals who had not been suspected of any wrongdoing, resulting in the most significant reforms to US surveillance policy since 1978. He has received awards for courage, integrity, and public service, and was named the top global thinker of 2013 by Foreign Policy magazine. Today, he works on methods of enforcing human rights through the application and development of new technologies. He joined the board of Freedom of the Press Foundation in February 2014.

Snowden will talk about privacy, civil rights and the surveillance state.

Todenhöfer published numerous best-selling books. His books center around his conviction that peace should be achieved through negotiations only. In 2003 he wrote “Who cries for Abdul and Tanaya?”, decribing the war-stricken lives of a young Afghan boy and a young Iraqi girl. He wrote “Andy and Marwa” in 2005 wherein  he describes the fate of the American Andy and the Iraqi girl Marwa during the Iraq war. It was followed in 2008 by the bestseller “Why do you kill, Zaid ?” which was followed most recently in 2013 by his last book “Thou shalt not kill”.

Jeremy Scahill will address questions regarding US foreign policy and the military industrial complex.

Richard D. Wolff is Professor of Economics Emeritus, University of Massachusetts, Amherst. He is currently a Visiting Professor in the Graduate Program in International Affairs of the New School University in New York. Wolff has also taught economics at Yale University, City University of New York, and the University of Paris I (Sorbonne). He is a co-founder and contributor of Democracy at Work, a non-profit organization that promotes democratic workplaces as a key part of a transition to a better economic system.

Wolff has published many books and articles, both scholarly and popular. Most recently, in 2012, he published the books Democracy at Work: A Cure for Capitalism (Haymarket Books) and Contending Economic Theories: Neoclassical, Keynesian, and Marxian, with Stephen Resnick (Cambridge, MA, and London: MIT University Press). He writes regularly for Truthout.org. He has been interviewed on The Charlie Rose Show, Up with Chris Hayes, Real Time with Bill Maher, Democracy Now!, Al-Jazeera English, Thom Hartmann, NPR, Alternative Radio, and many other radio and TV programs in the United States and abroad. The New York Times Magazine has named him “America’s most prominent Marxist economist.

Wolff will talk about freedom and democracy in the political economy.

He was one of the founders of the Subversive Festival and has participated in many movements, from occupations to the World Social Forum. Together with Greece’s ex-finance minister Yanis Varoufakis he founded Democracy in Europe Movement (DiEM25): www.diem25.org

Srećko Horvat will talk about the role of political activism and grassroots movements.

As a writer and journalist, Raza’s research on political and economic issues was featured on the Tribune Express which he left in 2013 to found acTVism Munich.

If you need a donation receipt, please send a request through our contact form. Enter “Donation Receipt” in the subject line. Please provide your name and address as well.

acTVism Munich e.V. is a registered non-profit organization. We exclusively and directly pursue non-profit and charitable aims. Any money is administered voluntarily resulting in no administrative costs.

To donate click here or on the picture below: