On May 12, 2018 a conference “Two Minutes to Midnight, How do we move from Geopolitical Conflict to Nuclear Abolition?” was convened at Judson Memorial Church, New York City to analyze and warn about the current nuclear dangers, to raise the UN Nuclear Weapon Ban Treaty and other disarmament initiatives, and to build the US and world movement for peace and complete nuclear disarmament.

Below you will the video of the speech that Daniel Ellsberg held at this event. acTVism Munich translated the content into the German language in order to create global awareness on the vital information that was presented in this speech.

To read the whole transcript of this video, please click here. 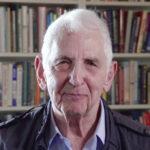 Daniel Ellsberg was a consultant with the Pentagon and the the White House, where he drafted plans for nuclear war. In his book titled The Doomsday Machine: Confessions of a Nuclear War Planner, Ellsberg reveals for the first time copies of top-secret documents from his nuclear studies—an entire second set of papers in addition to the Pentagon Papers, for which he is known to have leaked in 1971. Ellsberg is also the author of a 2003 memoir about the Pentagon Papers and Vietnam called Secrets. He’s the subject of the Oscar-nominated documentary The Most Dangerous Man in America. Ellsberg is  a character in the Steven Spielberg film about the Pentagon Papers called The Post released in 2017.
FEAUTRED IMAGE CITATION: