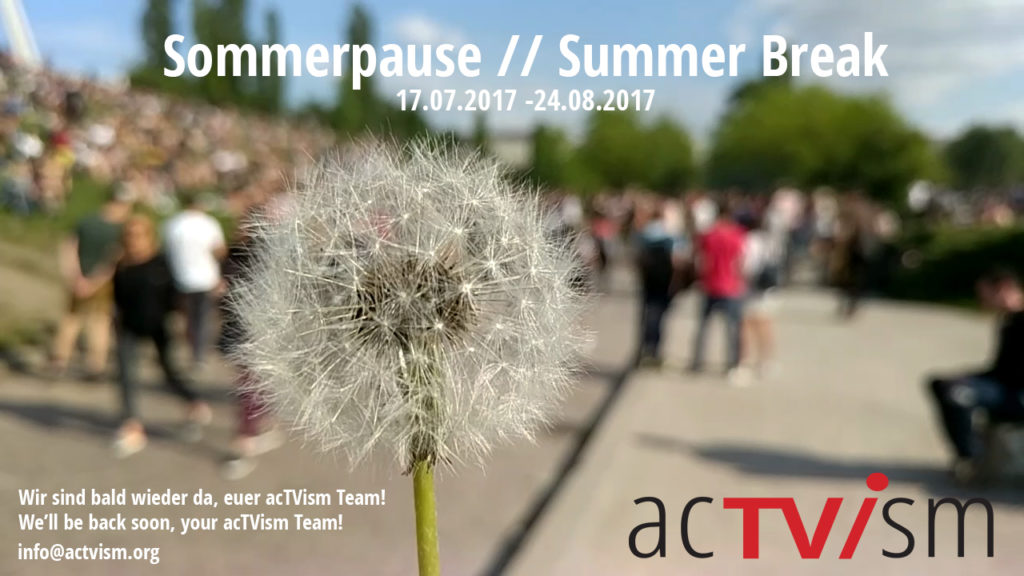 Announcement: A Message for our Supporters

We’ ve come a long way together, thanks to your donations and the commitment of dedicated volunteers. We are building a truly independent media network, which does not rely on advertisements and state or corporate funding.

However, our limited capacities and resources also mean that we encounter financial difficulties and staff shortages. The Summers are one of those periods where we neither have sufficient personnel nor financial resources to continue. Hence we will be taking a break from July 17th until August 24th to recuperate our energy and financial resources which we will require for the next season.

VIDEO: Announcement: A Message for our Supporters

Thanks to your support, acTVism was able to organize a major event this year with NSA-Whistleblower Edward Snowen, investigative journalist Jeremy Scahill and other experts. It was not only sold out three months in advance and attended by 700 guests but was also viewed online by about half a million people. Furthermore, we were able to produce reports, interviews and educational videos with experts such as Prof. Yanis Varoufakis, Dr. Daniele Ganser, Dr. Rainer Mausfeld, Prof. Noam Chomsky, Prof. Bill Black, Prof. Vijay Prashad, Prof. Richard D. Wolff, author Ernst Wolff, former CIA-Analyst Ray McGovern and many more. We also provided a voice to young and upcoming activists such as the Climate March organizers in Munich, Srecko Horvat & DIEM25, Polina Malaja, Kerem Schamberger, Sören Altstaed, etc. All of this content was made available for free in English and German.

Together, we have built a rich archive of vital information that we believe is going to strongly benefit ourselves and future generations. We intend to continue on that path and we’ve already planned our next projects for September and another event in January 2018.

The only thing that hasn’t changed since day one is the fact that we’re entirely dependent on your support. Help keep this momentum going by donating to our Crowdfunding today: https://www.betterplace.org/en/projects/51400-actvism-munich-crowdfunding

Thank you for the love and support!