In this exclusive interview with Wikileaks investigations editor, Sarah Harrison, we talk about the case of Julian Assange, the findings of the UN working group on arbitrary detention, national security, international law and how one can support whistleblowers.

These questions and many more are addressed in the following video:

Sarah Harrison about the state and condition of Julian Assange in the Ecuadorian embassy:

Well he stays very strong. He focuses on his work a lot and with his type of personality and work ethic this keeps him very busy and keeps him going. We have a lot of good publications coming up this year, so yea, that definitely keeps him busy. There have been some interesting wins in his legal case this year, for example, the United Nations ruled that his attention arbitrary and that United Kingdom and Sweden should release him immediately. Sadly, those countries are not actually following the United Nations judgement but it is still a positive move forward in his case.

Sarah Harrison about the dismissal of the UN Working Group on Arbitrary Detention:

Well Julian actually has asylum due to the threat of the United States. There is a very secret grand jury that is going on that is unprecedented in scale and nature and the largest investigation into a publisher ever. This continues until this day, it’s been going since 2010 and it is for this threat that he has asylum. Obviously as if we’ve seen in a number of situations the UK & the US are very close politically and there is the case with Julian has been highly politicized. So it is within that realm understandable that the UK [are] upset the United Nations are trying to ensure that they follow the rule of law in this case. It is very sad to me as a British citizen that our MPs can stand there and say that the United Nations is ridiculous. To me that is just sad and shows how much we have diverted from the rule of law in our supposed Western democracies.

Sarah Harrison about facts of US attempts to extradite Julian Assange:

A number of documents come out in a variety of ways some through hard Freedom of Information Act cases within the US. One came out interestingly couple of years ago that was subpoenas to Google for emails of a number of Wikileaks staff including myself. This was my personal Google account that I hadn’t used for quite a number of years… but when.. we were allowed to be told about this subpoena, we were given documentation on this and this showed the legal charges, the criminal codes the US government had to use to get this subpoena. And yes as you say, this included the Espionage Act, Computer Fraud and Abuse Act, Conspiracy and a number of others

I think that it is clear to many people that the actions of Manning, Snowden, Assange are actually to do with not only higher ethic but actually within the rule of law, particularly when it comes to Edward Snowden and the US constitution – he has actually just been upholding that with his actions.

To see more of our work with whistleblowers & investigative journalists, click here. 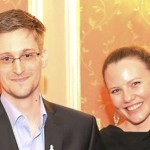 Sarah Harrison is a British Journalist, Investigation Editor at Wikileaks and the director of the Courage Foundation. She played a decisive role in accompanying NSA Whistleblower Edward Snowden from Hong Kong to Moscow when the highly classified NSA documents were released in 2013.

[…] In this exclusive interview with Wikileaks investigations editor, Sarah Harrison, we talk about the case of Julian Assange, the findings of the UN working group on arbitrary detention, national security, international law and how one can support whistleblowers. […]