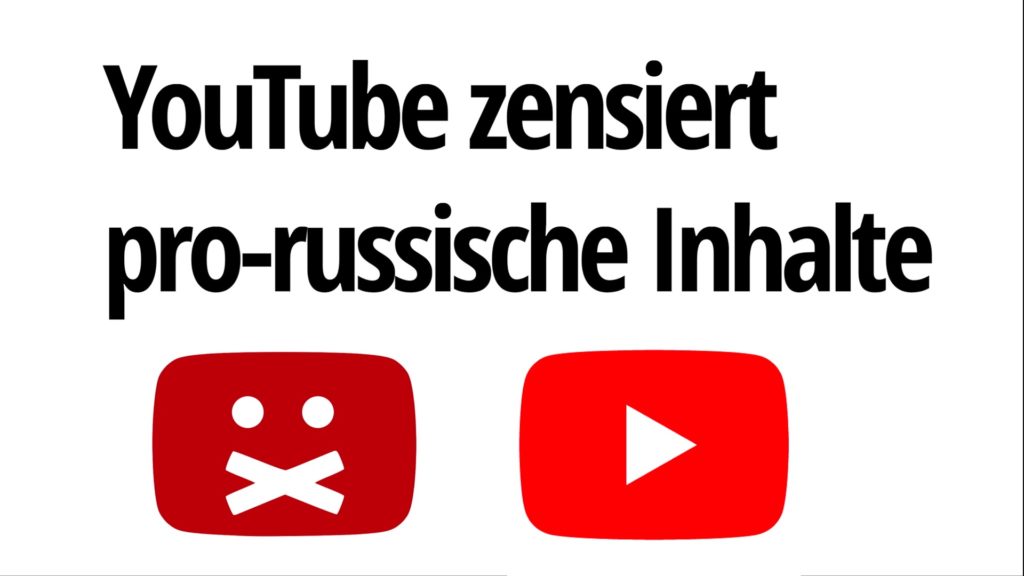 Many don’t see a problem with this and don’t understand what freedom of speech actually means. When a private corporation that is accountable to no one and operates in secrecy, like Google, starts banning content it deems untrustworthy, freedom of speech and expression is seriously threatened. Free speech doesn’t just mean giving air time and freedom to opinions, perspectives, and viewpoints that you agree with. It also means the opposite: airtime for critical voices, dissenters, and those who hold opinions with which you disagree.

Glenn Greenwald – the investigative journalist who published the Snowden NSA documents – has documented a whole series of lies and falsehoods spread by the Western media, starting with the 2003 Iraq war and weapons of mass destruction and continuing to the present day. From the 2001 anthrax attack allegedly perpetrated by Saddam (later found to have been carried out by a U.S. scientist), to the coverage in the run-up to and during the 2008 financial crisis, Russia’s interference in the U.S. elections, the Russian attack on the U.S. power grid, the Hunter-Biden leaks, Assange’s ties to Trump, Snowden as a narcissist, Der Spiegel’s debacle over Syria (for which they had to apologize), etc. – the list is so long that one could literally write an entire library on the subject. I have also documented how the Tagesschau constantly omits essential facts and context when it comes to its coverage of Iran, North Korea, Syria, Israel-Palestine, etc. And that’s not even my opinion – in many of these cases, the major Western media’s stories fell apart and the writers had to retract their stories or even apologize – even though the damage is done. The original stories can get so much attention and affect millions of people around the world, while the correction or retraction gets little to no coverage.

Does that mean Western media should be banned and removed from YouTube for lying or spreading fake news? Not at all. It means that if you think a news story is propaganda, at best you can prove that it is not. Banning something may make you feel better and seem to have temporarily solved the problem, but it raises a much bigger issue: Who decides whether to ban something? Who controls and monitors those who decide to regulate free speech? What are their criteria? What if they become the online police and bring their own political ideology into the monitoring process? What about double standards? What about subjective interpretations? Is there an independent judiciary? Is there recourse for those who are blocked? Are the regulators of opinion and discussion free from influence (Facebook, for example, is known to have ties to pro-U.S. think tanks and U.S. policymakers)?

I can give you an example: The Azov Battalion – a neo-Nazi group integrated into the Ukrainian National Guard to fight Russian separatists – was long banned on Facebook. But since the Russian invasion, Facebook has decided to reverse its decision and give this movement a platform on Facebook to support the Ukrainian fight against Russia. Do you see the problem here? It’s not about what you think is right or wrong in this conflict, but about a larger problem that I’ve already alluded to: Facebook’s management-which is unaccountable and secretive-controls discussion and discourse on a supposedly neutral platform based on its own political views-which in this case coincide with those of our government. This raises further problems: Why does the Azov Battalion, which believes in “white supremacy” and has attacked Jews in the past, have a greater right to express itself on Facebook than, say, Hamas? Why are voices that believe Russia’s war is justified banned, while voices that believe the Saudis’ war on Yemen is justified continue to be allowed on Facebook? Do you see what I mean? If you focus on principle rather than substance, given the many complicated issues in the world, you will find that once social media starts playing police, they not only inject their own political views into the process, but also face so many double standards that the entire process is exposed as a tool to promote their own worldviews. In essence, we are witnessing what many human rights and privacy activists have feared most: the merging of social media giants with the national security state. It’s a development that Edward Snowden warned us would take place as soon as an emergency or crisis erupts in the name of “national security” or “combating propaganda.”

If we don’t see this development – that corporations that control the largest platforms for discourse and discussion are aligning themselves with the views of our national security state and beginning to play police – as a much greater threat than so-called “online propaganda” here and there, then we have understood very little about the importance of free speech and expression to a democracy. A dangerous precedent is being set here. This is just the beginning.

Since this ban depends on YouTube’s mysterious and vague interpretation and criteria, which they only keep to themselves, and can be used against progressive and independent channels like ours, we ask all our viewers to wait no longer and switch to our Rumble Video channel today. We launched this channel in November 2021 and 5 months later we only have about 600 subscribers. Our YouTube channel, on the other hand, has 100,000 subscribers. The transition is too slow and any day we could face an unexpected ban, although our goal is not to justify the Russian war, but to provide a perspective that improves the understanding of this conflict that the media and the political establishment are not providing to the public with the appropriate frequency and quality.

Zain Raza is the Founder and Senior Editor of acTVism Munich. He is a journalist, activist and cultural promoter in Munich. As an activist he co-organized a number of demonstrations in Munich which included “March Against Monsanto”, and as a cultural promoter he brought hundreds of people together with his event “Pakistani on the Menu” that presented food, arts and music from many different cultures. As a writer and journalist, Raza’s research on political and economic issues was featured on the Tribune Express from 2011-2013. In 2013 Raza founded acTVism Munich e.V.-  an independent, non-profit & bilingual media network. Since then Raza has directly overseen and directed the production of over 1000 videos. His interviews include experts such as Edward Snowden, Wikileaks, Noam Chomsky, Daniel Ellsberg, Chris Hedges, Rainer Mausfeld, Gerald Hüther, Yanis Varoufakis, Glenn Greenwald, Frans de Waal, Nils Melzer, Jeremy Scahill, Jürgen Todenhöfer, Peter Kuznick, Michael Shermer, Jill Stein, Katja Kipping, Medea Benjamin, Hans-Christian Ströbele, Richard D.Wolff, Lawrence Wilkerson, Ernst Wolff, William Binney, Ray McGovern, Thomas Drake, Abby Martin, Annie Machon and many others. To find out more about Zain’s background, click here.